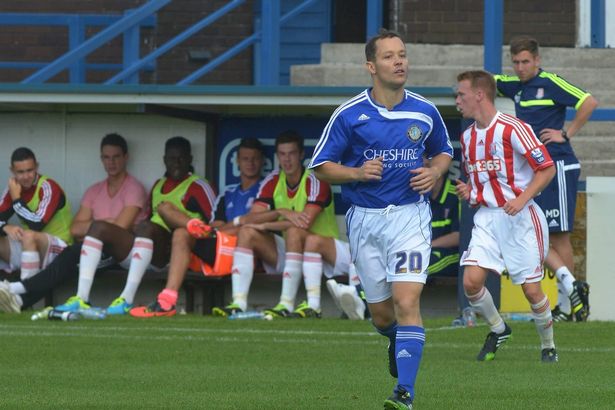 Macclesfield Town fan, James Gorfin, had the pleasure of playing for the Silkmen last Saturday in the 2-1 friendly defeat to Premier League outfit Stoke City, but his dream was unfortunately cut short by injury.

Mr Gorfin, CEO of G2 Recruitment and Vivid Resourcing, made a generous donation of £10,000 to play the last 20 minutes of the game. However, after an ambitious lunge to get the end of a cross into the area, the successful businessman was forced off with suspected groin strain after just 10 minutes on the pitch.

The Alderly Edge resident had been training with the team in the week running up to the friendly and was disappointed about being forced off: “It was a brilliant cross from the right, my eyes lit up but I couldn’t quite sprint quickly enough to get on the end of it.

“I tried to put a burst on and when I stretched, that’s when it went, I felt it straight away.

“I was pretty gutted, it would have been unbelievable if I’d got on the end of that and scored but I probably delayed my late run into the box too much, especially as I couldn’t sprint properly.

“I’d paused and tried to reach it and that’s when my groin went again.

“If I wasn’t injured I could have gone the full 20 minutes and I might have scored.”

The aggressive reception from the Stoke players was something that surprised the company owner, as well as the pace of the game.

“You think you’d have loads of time on the ball but it’s pretty mental how quick the game is and I did get smashed by one of the Stoke lads when I got one of my passes away,” Mr Gorfin told the Manchester Evening News.

Mr Gorfin has gladly offered his services in the future should the Town management team ever need an extra member to help bolster-up the squad after seeing his promising, but short display.

Embed this on your Site: Copy and Paste the Code Below