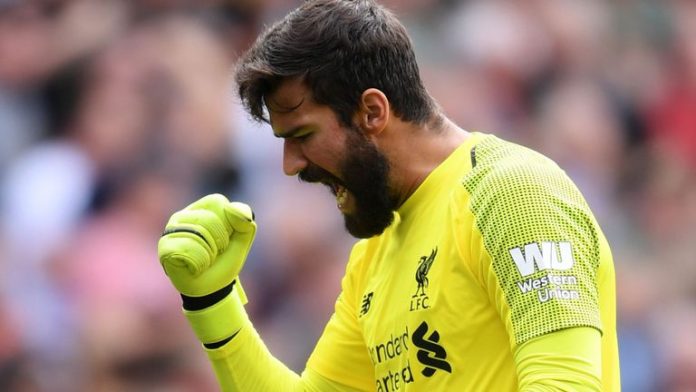 We’re almost at the halfway point in the Premier League season and things are hotting up at both ends of the table.

Liverpool lead the way by a point Manchester City, with Tottenham Hotspur six points off top spot in third place. Fulham remain rooted to the foot of the table.

Alisson gets away with one

Alisson received plenty of praise for a key save during Liverpool’s Champions League victory over Napoli during the week, but he was lucky to get away with a major blunder against Manchester United on Sunday.

The Brazilian fumbled a Romelu Lukaku cross to hand Jesse Lingard an equaliser at Anfield and had United not been so inept the error could have cost the home side dearly.

Only Asmir Begovic and Bernd Leno have given away more Premier League goals with errors this season than Alisson. Don’t believe the hype just yet.

Tottenham suffered an inevitable come down from successfully navigating through to the last 16 of the Champions League by turning in a lacklustre performance against Burnley on Sunday.

It was no surprise to see many of Spurs’ stars produce a leg-weary display against a Clarets side who lacked much in the way of attacking intent.

Just six points separates the top three in the Premier League and with Man City and Liverpool set to face each other in early January, Spurs remain firmly in the title picture.

New Southampton manager Ralph Hasenhuttl already appears to have had an impact at St Mary’s judging by Sunday’s thrilling 3-2 victory over Arsenal.

His high-intesity style worked a treat, with Saints never giving Arsenal a moment’s peace throughout the game.

The performance was in stark contrast to some of the dire displays produced under former boss Mark Hughes and bodes well for their chances of getting out of trouble this season.

Hazard takes frustratrion out on Brighton

Eden Hazard’s body language during the early stages of Chelsea’s win at Brighton & Hove Albion suggested it was going to be another frustrating afternoon for the Belgian star.

Hazard seemed at odds with both his teammates and the opposition, bemoaning misplaced passes and his rough treatment by the opposition.

However, he channelled his angst in the best possible way, scoring one and making another as Chelsea recorded a 2-1 victory.

Anderson the difference for West Ham

West Ham United’s 2-0 victory at Fulham took them up to ninth in the table, just two points behind sixth-placed Man Utd.

Felipe Anderson had a hand in both the Hammers’ first-half goals and he has really sparked into life over the past few weeks.

West Ham were largely untroubled in the second period and Anderson was unlucky not to crown his performance with a goal after being denied Sergio Rico.