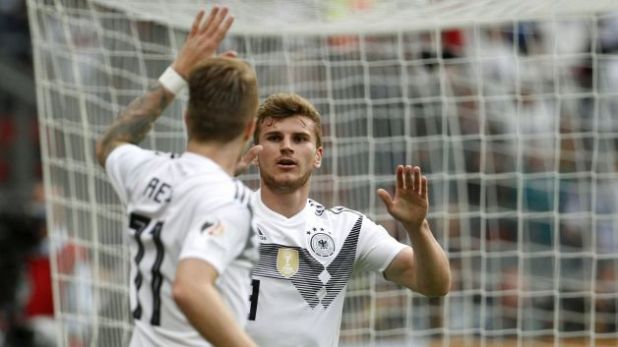 The 2018 World Cup begins on Thursday, with the final preparations being put in place by the competing nations ahead of Russia and Saudi Arabia kicking off the first game.

In today’s news, one England star talks up a position change, while a Premier League star on Argentina’s books has been ruled out of the competition.

In the latest round of international fixtures, Germany, Croatia and Switzerland have all recorded victories.

West Ham United fans look away now – Argentine playmaker Manuel Lanzini has ruptured his cruciate ligaments in national training and as such will not play in the World Cup.

The skilful attacking midfielder is held in high regard in his homeland and made Jorge Sampaoli’s 23-man squad despite the wealth of creative talent originating from the South American country.

Argentina confirmed on Friday that Lanzini has picked up the serious injury in training and are expected to name a replacement over the weekend.

While the West Ham man was expected to be a substitute rather than starter, the news will have disrupted Sampaoli’s plans somewhat.

Henderson as an attacking midfielder?

As reported earlier this week, England manager Gareth Southgate may well field just one holding midfielder in his 3-4-2-1 formation, allowing an extra attacking player to make the starting line-up.

This could see either Eric Dier or Jordan Henderson drop out of the starting XI – but the Liverpool man has been talking up his versatility.

The box-to-box man has stated he is happy to be used higher up the pitch for England if needed.

“I will play wherever he wants me to play – whether that is a more protective role or a more advanced role,” Henderson said.

“Obviously I have been a lot more used to the more entrenched position, but I would be pretty comfortable in either position.

“It is up to the manager to decide who is in the best XI for the first game and then for the games after that but I have felt in good form for a long time.”

Although Henderson is more than capable of operating in a more-advanced role, the likes of Jesse Lingard, Marcus Rashford, Dele Alli and Raheem Sterling are more adept in attacking midfield positions.

Germany have broken a five-game run of matches without a win, albeit in unconvincing fashion, as they beat Saudi Arabia 2-1 on Friday night.

Joachim Low played what may be his first-choice starting XI and goals from Timo Werner and a Saudi own goal secured victory in Leverkusen.

Croatia also got back to winning ways, beating Senegal 2-1 courtesy of Ivan Perisic and Andrej Kramaric.

Luka Modric has been playing in an advanced role of late and continued in this clash, while the Africans fielded a strong side – with Ismaila Sarr scoring their goal.

While Poland drew 2-2 with Chile, Switzerland recorded a 2-0 win over Japan in Lugano as Ricardo Rodriguez and Haris Seferovic netted.

The Europeans will be confident of being competitive in Group E, but the Asians face a tough task in Group H after a run of five winless friendly fixtures.

Fancy your skills at predicting the outcome of games at World Cup 2018? Join our predictor competition and prove it!