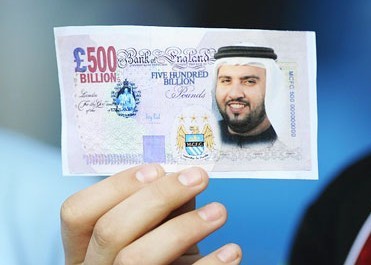 As the money involved in football increases, so does each individual player’s salary. According to a study, a player at one of the top-flight teams in England earns £1.5 million a year. This compares to the £646,000 of six seasons ago.

The disparities of finance between the top division and lower league teams are still very obvious:

It’s very difficult to find the exact wages of each Premier League, but, the English Premier League is constantly under the microscope when it comes to the wages that are paid by its clubs to managers and in particularly to players.

Now, top players in the football league were earning, in one year, what today’s stars earn in a week! A Premier League footballer earns on average £780,000 while a nurse takes home £23,500 and a teacher £30,000. Among the highest earners are Manchester United striker Wayne Rooney, who receives £250,000 a week, and Manchester City’s Carols Tevez, who gets £220,000.

The spiralling wages of star players is threatening to pull clubs and the league itself to the brink of bankruptcy, with salaries becoming uncontrollable.

The following is a round-up of the highest paid manager, goalkeeper, defender, midfielder and striker in the Premier League.

Arsene Wenger is currently the highest paid manager in the English Premier League, with an weekly wage of around £115,000 per week.

This astonishing sum of money ranks him alongside some of the highest paid players.

The Chelsea and England captain John Terry is the highest earning defender in the English Premier League with a salary of around £130,000 a week.

Manchester City signed Yaya Toure from Barcelona in 2010 for around £24 million and promptly made him the highest paid midfielder in the Premier League, with a whooping £190,000 a week wage packet.

The arrival of the billionaires into the English Premier League, such as Chelsea’s Roman Abramovich and Manchester City’s Sheikh Mansour bin Zayed Al Nahyan, has pushed the boundaries of wages beyond belief.

Top-flight earnings have shot up by more than 200 per cent since 2000 despite a world recession, leaving everyone else behind and reaching a level which has raised questions about the game’s financial sustainability. When bonuses from team and individual performances, image rights and other commercial endorsements are added, increasing the figures by up to 100 per cent, the gap is even wider. On top of this, the effects of the Sky TV deals with the Premier League are clear, making the competition the richest in the world.

The answer to ending ever increasing wages may well be a salary cap, similar to that which is imposed on certain sports in the US. There have been discussions about this very issue in recent times, but there has not been any concrete movement.
Lower Leagues Finances

Figures show that the increase in television revenues has also benefited players in the lower leagues.

However the difference between these divisions and the top-flight are still huge. Naturally the better players will be played more money. But a £1,000,000 a year may be considered slightly over the top.

Especially considering the gap in quality between the bottom of the Premier League and Championship is becoming smaller. It is tempting to believe that is the case after seeing the three promoted clubs hit the ground running for the second successive season. With two of the three promoted clubs staying up in each of the past three seasons, it feels as if there is a trend emerging whereby the Premier League’s new entrants are no longer the cannon fodder the bookmakers and media have long thought them to be. Whether that is down to Championship clubs improving and approaching the top flight with bolder tactics or standards dropping among two thirds of the Premier League. In my opinion, it’s down to the Championship clubs improving.

Football League research has revealed that the 72 clubs that form the Championship, League One and League Two are on course to rack up a combined £2billion of debt unless spending and investment from ‘sugar daddy’ owners is curbed. The regulations will be introduced next season on a gradual basis, but sanctions for non-compliance will not be put in place until the 2014-15 season.

The money generated from any fine imposed will be shared among the clubs in the Championship who are compliant with the regulations. The initiative is seen as an important step to stopping Football League clubs going bust. Earlier this season Portsmouth went into administration and Football League chairman Greg Clarke predicts several clubs will go out of business if this scheme is not adopted.

The Football League has been consulting with the Premier League and the FA, they’re confident the initiative will get the official backing of both bodies. So potentially, this model could be seen in the English top division. If this happens, the league’s highest paid players may face a wage cut.

Having said this, if you look at the commercial revenues generated by US sports, it’s evident that football, a more global sport, has still some way to go before it can reach its financial peak. So expect the TV deals, player wages and ticket prices to keep rising.