Chelsea defender Filipe Luis has had a relatively quiet first season since his big money move from Atletico Madrid. He only made 15 Premier League appearances for the Blues (nine starts) as Jose Mourinho tend to favour Cesar Azpilicueta for the left-back positions instead.

Spanish press have speculated that Chelsea could be tempted to cash in on Luis in the summer. Luis excelled under Diego Simeone and the player would be delighted to return back to his old back, claim Marca. 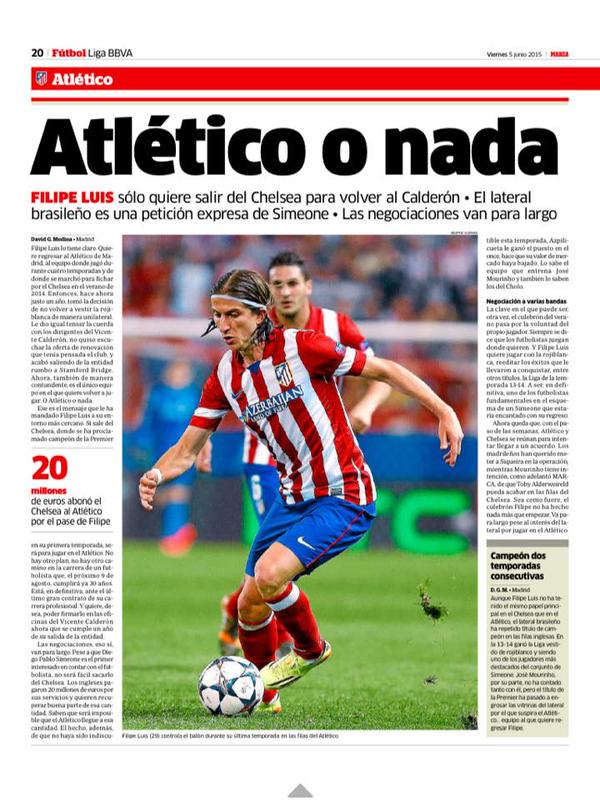 The Madrid based newspaper claim that Luis has told his close friends that he would either join Atletico or else stay at Chelsea and fight for places.

Simeone is keen to have him back, but Chelsea won’t make the move easy for the Brazilian. Having spent over 15m for him last summer, the Blues would be looking to recoup at least over 10m transfer fee for the 29-year-old.

Other Chelsea Transfer News: According to several media reports, Radamel Falcao could join Chelsea in the summer. The Colombian wants to stay in the Premier League and believes his agent Jorge Mendes will sort out a deal for him.

Also, reports suggest that Juan Cuadrado, the new January signing, could move to the Serie A on loan, after failing to impress since leaving Fiorentina.