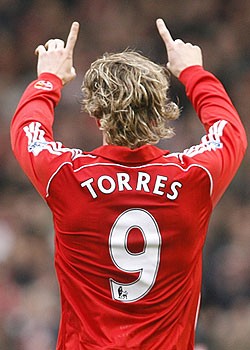 Where has the nostalgic feeling gone for a player to be proud of adorning the colours of a club that has gifted so much to the history of the game? Just ask Fernando Torres as he looks set to move for a British record transfer fee from Liverpool to champions Chelsea.

Torres is in envious predicament of being more or less on the team sheet every single week along with the backing of his supporters who have taken to him as one of their own as an adopted scouser – ever since he infamously wrapped his “You’ll Never Walk Alone” across his arm back in Madrid. Of course a move to Chelsea has it pros but will he be loved by the supporters in Blue as he is by those on Merseyside? It’s doubtful.

There is a synonymous relationship between Torres and the Anfield faithful, a seemingly devoted love by the two parties. The Spaniard has never made any secret of his passion for representing the club nor has he ever indicated a desire to leave up until now. Why should one bid from Chelsea besmirch his affiliation with the club by jumping ship at the first attempt?

This has been the first concrete offer for his services despite the continuous whispers over the years that have linked him with moves away from the club. Chelsea have taken the first radical step in an attempt to lure one of their adversaries three iconic figures to West London (having previously tried and failed with Steven Gerrard back in 2005). Maybe a phone-call from Rick Parry could convince Torres otherwise as it did back then but maybe he should look closer to home and seek the advice of one Kenny Dalglish, his new gaffer. No doubt King Kenny’s arrival back in the dugout is a sign that the football club are turning a corner and Torres is an integral part of refilling the cracks that have portrayed the club in a negative light in the last eighteen months.

Didier Drogba for instance has been a marvellous professional to Chelsea Football Club but even the fans of the champions were more or less willing for his exit after his infamous sending off in the Champions League Final in 2008. Will he go down in the clubs folklore? Absolutely, but will he be revelled by the fans as they do for Kerry Dixon, Chopper Harris, John Terry and Frank Lampard?  Possibly not.

Fernando Torres has a unique rapport with the fans on Merseyside who have just grown more and more affectionate towards the Spaniard since his arrival in 2007. Does Fernando have a short memory?  The release of his autobiography where he indicated in his own words his honour to play at Anfield and hear the Kop chant his name week in week out, tingled his spine.  Minutes after clinching the European Championship in 2008 with Spain he expressed his wish to win the Premier League for his people in England – even adorning a Liverpool scarf as he paraded the FIFA World Cup last summer – these all now seem to be distant memories. On Torres’s part he is destroying a rather significant love affair between himself and the football club by handing ina transfer request and anchoring for a move to West-London.

There is no doubt that Liverpool have been in a slump in the last eighteen months but with renewed optimism at the club with the arrival of King Kenny and the acquisition of Luis Suarez, ‘Nino’ has decided to throw a spanner in the works by expressing his wish to leave. Why now? Why when it seems the club are turning a corner, decide to jump ship mid season to a Premier League rival? Chelsea is a big football club and will compete year in year out for major domestic honours but there is no reason why he can’t challenge with The Reds as the new owners look to inject more and more money into the club and rebuild what seemed to be a sinking ship.

Torres could be forgiven for proclaiming his unhappiness at the end of the season. What has also hurt the Liverpool fans is the timing because they need their star striker to help aid their push for European qualification. It’s ironic how he is eager for a move to a club who he has hurt so many times over the years – scoring seven goals in Red against Blue.

Participating in the UEFA Champions League is of course a desire for any top player and Chelsea can certainly offer that. With all due respect to Liverpool it looks as if it will be at least eighteen months before they witness such football at Anfield once again with the top-four looking beyond them this term. Nevertheless is this the be all and end all? If Fernando was as committed to Liverpool as he said he was then surely this wouldn’t be an issue. He’s playing in one of the top leagues in the world for one of the elite entities who only look set to rebuild – the signing of Suarez indicates that.

However there is no going back it seems, Torres needs this move to Chelsea otherwise he is set to endure four uncomfortable months on Merseyside until the opening of the summer window. The imagery of him leaving Melwood Monday morning with fans heckling him when they used to adore him is as clear as crystal that he is no longer a hero in the North-West, but more so the villain.