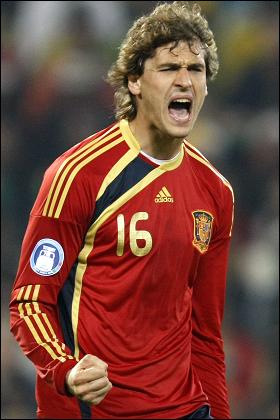 There is little doubt that Fernando Llorente has done nothing to harm his reputation as of late. The Athletic Bilbao striker scored twice in Spain’s victory over Lithuania and against Scotland on Tuesday night he came off the bench to grab the winner. As well as his goals for La Seleccion, Llorente has also been in impress form for Athletic, scoring three times in six matches to help lift his team to seventh in La Liga.

Unsurprisingly his goals have not gone unnoticed, with Real Madrid reported to be interested in signing the 25-year-old. Madrid’s sporting director Miguel Pardeza did little to quash the reports either, heaping praise on the striker before adding that at the moment the squad is satisfactory.

“Llorente is a magnificent striker, who possesses some characteristics which are not in abundance. As well as that, he has progressed enormously in recent years, as can be seen in recent games with Spain and Athletic. He’s an interesting player, that’s clear. But right now we are only concerned about those that we have here. It’s too soon to talk about the future.”

With Gonzalo Higuain and Karim Benzema both seemingly vying for one spot at the Bernabeu as it is, any move for Llorente would have to be preceded by the sale of either the Argentine or the Frenchman, with the former the more likely to stay. Is the Athletic striker really what Madrid need though? Whilst Pardeza is correct in his assertion that his characteristics are ‘not in abundance’, it is not hard to think of a striker with very similar qualities who the capital club only let go one year ago – Alvaro Negredo.

Madrid exercised their buyback option on Negredo to bring him back to the club for €5 million, but then promptly sold him to Sevilla for €15 million. With only a year gone since they sold him, Madrid do still have a year left to exercise a buyback option yet again, but with the forward not yet at his best with Sevilla it seems unlikely that he will return to the Bernabeu once more.

Nevertheless, Negredo’s story illustrates perfectly the roundabout workings that are repeated at Madrid. First of all there is the assumption that they need a tall centre forward who can score goals with his head, then it is soon realised that crossing the ball relentlessly does not suit the Madrid style of play, and hence the striker is sold without been given a proper chance. It happened with Klaas-Jan Huntelaar, Negredo and it could well happen to Llorente, despite the fact that all three of them are much more then just big ‘target men’.

For his part, Llorente has not exactly ruled out a move away from Athletic, saying that he doesn’t know what will happen in the future but that at the moment he has a contract with the Basque club. Whilst the fans would love Llorente to stay, it might be hard for him to resist giving it a shot at a club like Madrid, especially when one considers that he could be at the peak of his career very soon.

Should Madrid decide to make a move for Llorente then it is likely to be expensive (perhaps in the region of €35 million), and the final decision could well lie with Jose Mourinho. With one of his favourite players, Didier Drogba, seemingly unavailable, the Madrid coach might well be tempted to try for Llorente, a player with similar characteristics to the Ivorian striker.

Mourinho and Madrid could be faced with competition next year though, as reports state that Barcelona and Tottenham Hotspur are also keeping tabs on the forward. Whilst a move to either club seems unlikely, considering firstly the style of play at Barcelona and also the language barrier at Spurs, there is no doubt that Llorente’s reputation, which has been on the up for a few years, is now growing even more. The striker has improved on his goals tally in every one of the last three seasons with Athletic and should he top 23 this year, his reputation could move him away from San Mames.