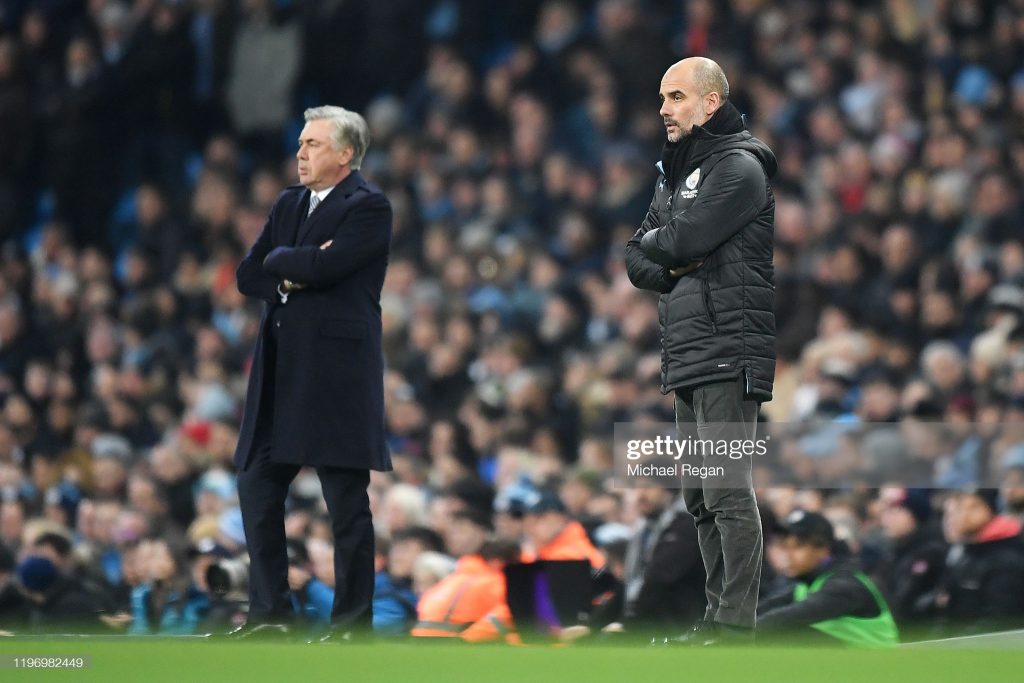 Manchester City travel to Merseyside this weekend to take on Everton at Goodison Park with a place in the FA Cup semi-finals up for grabs.

This tie comes just a month after the two sides last met in the Premier League, a comfortable 3-1 away win by a rampant City side in the midst of their record-breaking winning run broken recently by rivals Manchester United.

The Toffees come into the clash as underdogs, having lost their last two Premier League games in succession to Chelsea (2-0) and Burnley (2-1) respectively, and haven’t beaten City in any competition since January 2017.

An unexpected win for Carlo Ancelotti’s side would mean qualification for a first FA Cup semi-final and a first trip to Wembley since 2016 – excluding when Tottenham Hotspur used the national stadium as their home ground.

Since then, Everton have crashed out of the FA Cup in the third round three out of four seasons, including twice away at neighbours Liverpool.

Goalkeeper Jordan Pickford will miss this weekend’s game through a rib injury sustained in their defeat to Burnley and has not been selected in the England squad for next week’s World Cup qualifiers by Gareth Southgate.

Back-up goalkeeper Robert Olsen is also a doubt, along with Fabian Delph and star man James Rodríguez who have both been ruled out of contention.

City have won 24 of their last 25 games in all competitions and qualified for the quarter-finals of the Champions League this week.

With a quadruple still possible this season, Pep Guardiola has a fully fit squad to choose from at Goodison Park and will undoubtedly field a strong starting eleven.

Surprisingly, the Citizens have only won the FA Cup once under the Spaniard in his four previous campaigns in charge, having been knocked out at the semi-final stage on two occasions – both by Arsenal.

However, Wembley is like a second home to the Sky Blues. They already have a Carabao Cup Final against Spurs to play there next month, adding to an already impressive 17 matches in the last 11 years.

Favourites to make it a 19th appearance with victory over Everton this weekend, Guardiola’s side will relish the opportunity.