Portugal meet France at the Stade de France on Sunday in the Euro 2016 final.

Didier Deschamps takes charge of the favourites who have scored seven goals in their last two matches to reach the final, whilst the Portuguese have only scored eight in the whole tournament in comparison.

After a slow start to the tournament that only saw them beat Romania and Albania very late in their opening two matches, held by Switzerland in their final group game and come from behind to beat the Republic of Ireland 2-1, France have exploded into life to reach the final.

The hosts thrashed Iceland 5-2 in their quarter-final after leading 4-0 at half-time before beating Germany 2-0 to book their place in Sunday’s final.

Meanwhile, Portugal failed to win any of their first five matches in 90 minutes – drawing all three group games, beating Croatia in the 117th minute and then eliminating Poland on penalties before a 2-0 win over Wales in the semi-final.

Fernando Santos’ side have built a reputation over the past four weeks of being one of the dullest sides in France this summer and if they’re to win their first-ever major trophy, that’s how they’re going to have to play on Sunday too.

Here is how I see Portugal lining up for the final: 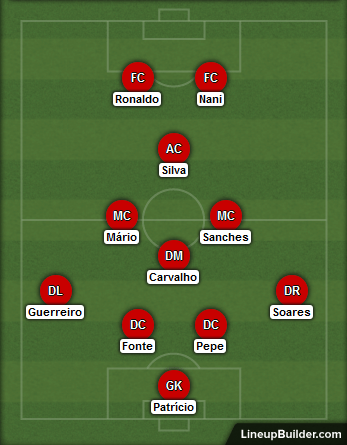 Portugal will play a narrow midfield as they have throughout this tournament, with width coming from the full-backs as well as Cristiano Ronaldo and Nani up top.

Stacking the midfield will give them belief they can keep the tournament’s top scorer, Antoine Griezmann, quiet, as well as star midfielder Paul Pogba.

However, Dimitri Payet has been one of the star’s of the tournament out on that left wing whilst Patrice Evra has also played like a winger bombing on from left-back in this tournament.  Bacary Sagna will do the same on the right wing to support Moussa Sissoko, or whomever plays down there for France.

Portugal’s way of scoring is simple – counter attacks, set pieces and Cristiano Ronaldo.  The Real Madrid star has been involved in all four of their goals in the knockout stages and scored a brace in their final group game.  They will be looking to him once more if they’re to have a chance on Sunday.

Ronaldo opened the scoring with a bullet header shortly after half-time against Wales before his scuffed shot set up Nani to make it 2-0 minutes later.  France know if they can tame the 31-year-old then Hugo Lloris should be in for an easy day.

Ultimately though, if Portugal are to lift the trophy, it comes down to keeping a clean sheet.

There is no doubt now who is going to win the Euro 2016 Golden Boot and Golden Ball, but if France are not be crowned the kings of Europe on Sunday then William Carvalho is one of several Portugal players who needs to be at their very best.

The Atlético Madrid star has six goals to his name with five of those coming in the knockout stages.  He also has two assists in their last three matches meaning Griezmann has been involved in seven of France’s nine goals since the group stage.

William Carvalho has a difficult game ahead of him to stay with the pace and movement of the number 10 who has drifted out on both wings and made excellent runs into the penalty area since Didier Deschamps has played him down the middle over the past three games.

Bayern Munich got their transfer business done before Euro 2016 in signing Portuguese wonderkid Renato Sanches.  Since being given his opportunity over the past two games the 18-year-old has excelled in bossing the midfield.  Coming up against Paul Pogba, a reported Manchester United summer target, makes for an intriguing and exciting battle in the final.

The Juventus midfielder has been hit and miss in France so far but has come good in their last two matches to help his nation reach the final for the first time since they won it in 2000.

Renato Sanches certainly has the ability to leave a mark on Pogba in this match – it’s a battle between two energetic and combative central midfielders with the experience leading towards the Frenchman.

France haven’t been reliant upon Dimitri Payet in the knockout rounds as they were in their first two group matches but the West Ham midfielder is certainly capable of being a match winner on Sunday.

Fernando Santos has certainly improved his defence in the knockout rounds – after conceding four goals in three group stage matches and looking shaky in the process, a sole Robert Lewandowski goal is the only time Rui Patrício has been breached in the last three games.

Southampton’s Cédric Soares has a tough match up against Dimitri Payet who is both a playmaker and creator out on the left wing, picking the ball up from the halfway line and enjoys cutting inside to have a crack at goal.

France’s 22-year-old would make only his third international appearance if he starts the final having started both the quarter-final and semi-final victories, initially in place of the suspended Adel Rami.

Samuel Umtiti was to blame for both of Iceland’s goals on his debut before an excellent match in shutting out Germany with a number of key interceptions and clearances as the world champions dominated possession and territory.

Cristiano Ronaldo has three goals in this tournament and has been key to Portugal reaching the final – a threat from inside and outside the box with both his feet and head.  It’s a tough ask to put on a relatively inexperienced defender but will give him a chance to show the world why Barcelona have just splashed out on signing him.