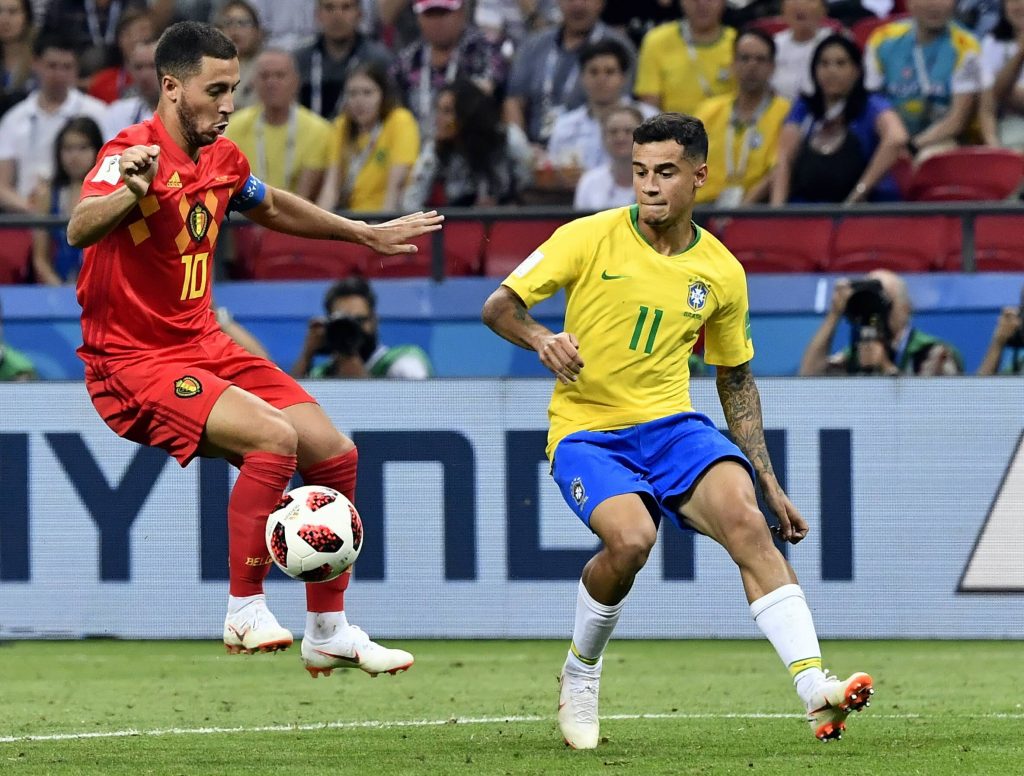 It may seem like a long time ago now, but there was once a time when Eden Hazard and Philippe Coutinho were two of the best players in the Premier League.

At Chelsea and Liverpool respectively, the two playmakers were putting in regular dazzling displays.

Hazard’s mesmerising dribbling struck fear into the heart of any right-back, while Coutinho’s gem of a right foot could pick out the top corner from anywhere within 40 yards of the goal.

Fast forward a few years, and they both probably wish they had stayed in England. Coutinho has fallen wildly out of favour with manager Ronald Koeman at Camp Nou, while Hazard has become public enemy number one in Madrid.

But who has been the bigger flop in Spain? Let’s have a look.

Hazard: The Belgian winger arrived at the Bernabeu for an unspecified amount. It is believed that his price tag ranges between £103-143 million. Whichever one it is, this makes him the most expensive player in Madrid’s history.

For comparison, their next three most expensive signings are Gareth Bale, Cristiano Ronaldo and Zinedine Zidane. Bale helped the club to four Champions League titles, and the other two are among the greatest players ever to grace the beautiful game.

Had they not signed Hazard, there’s a good chance that Kylian Mbappe would be a Madrid player by now.

Coutinho: Coutinho came to Barcelona in January 2018 for £103m, which could rise to £142m depending on if certain conditions are met.

It is unclear how many of these clauses have been activated, but there is a good chance that he is also the club’s record signing.

His competition for that title is not quite so illustrious. The only other players who have cost the Catalan giants a nine-figure sum are Antoine Griezmann and Ousmane Dembele.

If Coutinho had stayed at Anfield, Griezmann’s arrival may have been put forward by a year. Or maybe Neymar would have returned by now.

Hazard: With his brilliant dribbling, beautiful link-up play, and ability to register goals and assists, Hazard was expected to adapt perfectly to life in La Liga. Almost like a right-footed downgrade on Lionel Messi.

Ronaldo had been sold a year earlier for €100m, and it was evident that Bale was never getting back to his best.

With Sergio Ramos, Luka Modric, Toni Kroos and Karim Benzema all getting older, Hazard was supposed to be the main man at Madrid – the next Galactico.

Coutinho: Given his ability to play both as a left-winger and a central midfielder, Coutinho’s role at La Blaugrana was unclear when he signed.

Either way, it was hoped that the playmaker would be part of a highly successful team. He wouldn’t be their star man – because, y’know, Messi. But he was expected to be one of the standouts.

And, like Hazard, not many thought he’d have much trouble adapting to Spanish football. He’s technically brilliant, a good dribbler, links up well, good at short and long passing, and scores goals – fits La Liga to a ‘T’.

Hazard: The 30-year-old was arguably the Premier League’s best player during his seven years there.

In his time at Chelsea, he was nominated for PFA Player of the Year on five separate occasions. This was the level that he was supposed to bring to La Liga.

In reality, he’s been a shadow of his former self. He has scored just four goals in all competitions in the last two seasons – this is fewer than he got in any single season since 2008/09.

As for being the main man – he’s come nowhere near. There’s no doubt who the star player is at Los Blancos is right now, and it’s Benzema.

Madrid are worryingly reliant on the Frenchman for goals right now. Over the last two years, he has scored 55 in all competitions.

Their next highest goalscorer is centre-back Sergio Ramos with 17, then defensive midfielder Casemiro with 12.

It is worth noting that Hazard has been extremely unlucky with injuries. It is estimated that he has missed 58 games at Madrid through injury or illness. However, in the 40 games he has appeared in, far more would have been hoped of him.

Coutinho: Believe it or not, Coutinho’s time in Catalonia hasn’t been all bad.

Yes, he was sent out on loan to Bayern Munich (and subsequently scored twice in Barcelona’s 8-2 humiliation back in August), but there have been bright spells for the Brazilian.

In his first six months at the Camp Nou, he scored ten goals in 22 outings – this is a better strike rate than he had during any other season of his career.

Considering that Barcelona won the league that season, got to the Copa del Rey final, and reached the Champions League semi-finals, this is an underwhelming return.

Although he did score a beauty in the quarter-finals against Manchester United, which Liverpool fans will have appreciated.

But it’s not just the goals that suffered. He didn’t seem to be performing at the level that everyone knows he can.

For a brief moment at the start of the current season, it looked like he was on his way to redemption.

During the first few games of Ronald Koeman’s reign, he looked really sharp and involved. But he soon dropped off and has since fallen behind youngster Pedri in the pecking order.

Any chance of redemption?

Hazard: The biggest difficulty with Hazard right now will be his relationship with the fans. Madridistas are notoriously harsh with the players that don’t perform. Heck, even Ronaldo got booed once.

The winger was pictured laughing with former teammate Kurt Zouma and Chelsea goalkeeper Edouard Mendy after the second leg of their Champions League semi-final. There is no doubt that Madrid supporters will not take kindly to this.

What can he do to regain favour with the fans? Well, judging off the situation with Bale, even a bicycle kick in a Champions League final won’t be enough. So, as of now, redemption is looking highly unlikely.

Coutinho: Coutinho faces a very different and very unusual problem. Due to Barcelona’s dire financial situation, he is being kept out of the team to avoid meeting certain clauses in his contract.

The Catalan giants have racked up over €1 billion in debt. This isn’t going to go away anytime soon. As a result, they will look to save money wherever they can.

If he stays beyond this summer, then he could get himself back in the squad for next season. He has been linked with moves away in the transfer window. Premier League duo Arsenal and Everton apparently may offer him a route back to England.

This term, however, it is unlikely that we will see him back in a Barcelona shirt. As they go into their last four games of the campaign, they have Frenkie de Jong, Sergio Busquets, Pedri, Ilaix Moriba and Riqui Puig all fit and available to choose from.