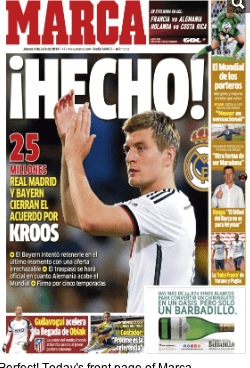 Check it out. This is the front page of Spanish newspaper Marca today.

According to the newspaper, Real Madrid have signed Bayern Munich’s world class midfielder Toni Kroos, who was also a reported target of Premier League giants Chelsea.

The club has agreed a transfer fee of €25m while Kroos will join the reigning European champions on a five year deal.

Chelsea were though to be interested in Kroos, with the Blues having offered offered a staggering €8.5m-per-year deal for the German international.

The 24-year-old midfield maestro rejected offers from Bayern to sign a new contract and now Marca claims that Real Madrid have snapped him up for next season while the deal will be officially confirmed after the World Cup.

Kroos was also a reported target of Manchester United, but the Red Devils possibly have shifted their target elsewhere, with The Times reporting, Louis van Gaal is keen to sign Bayern Munich’s world class midfielder Bastian Schweinsteiger at Old Trafford.

As a result of this deal, Madrid are now expected to sell Sami Khedira, who could join Arsenal in the summer.