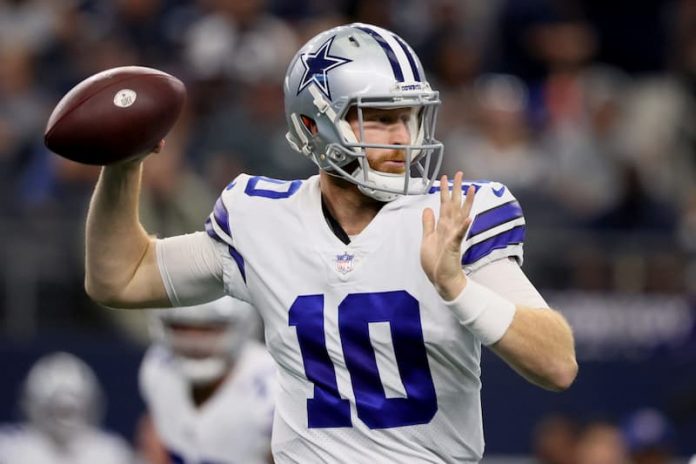 Cooper Rush made a real impact on the field for the Cowboys yesterday. His performance yesterday, and previous games, have got people asking if he’s ready to be the starter.

Yesterday’s 23-16 win at the New York Giants was only Cooper’s third start, but his record stands at 3-0 as a starter.

The Cowboys are blessed to have the talented Dak Prescott as their starting QB. But the performances of Rush have put question marks on who should be the starter.

Who Is Cooper Rush?

Rush was signed as an undrafted free agent by the Dallas Cowboys after the 2017 NFL Draft. His three wins in three starts as QB for the Cowboys, means Rush is the first undrafted QB to achieve that record since 1999.

Cooper Rush is the first undrafted QB to win each of his first 3 NFL starts and throw for 750+ yards over those starts since @kurt13warner in 1999 with the Rams.

2020 was a tough year for Rush. He was waived by the Cowboys, allowing them to sign Andy Dalton. Rush went onto sign for yesterday’s opponents, the New York Giants. Just four months after signing, he was released by the Giants.

The following month Rush re-signed for the Cowboys. He was signed to be back up Prescott, who had suffered an injury.

Fast-forward just under two years, his hard work and resilience has resulted in Rush being considered as a starter for Dallas.

Will Rush Get His Chance To Prove Himself Consistently As A Starter?

Prescott is a proven starter, but Rush’s performance as a starter have earned him respect from many.

But will he be given the chance? Here’s what Jerry Jones said about the possibility last Thursday:

“If (Rush) comes in there and plays as well as Prescott played … over these next games ahead, I’d walk to New York to get that. … Of course we want Dak to be here next week. That’s the thing, you do. But Dak and I want Rush to lead the team to a victory here and get another win. Looking back, when Dak was playing instead of Tony, it was game by game.

“So do I think that it’s possible for Rush to come in here and play at a level and win games the way Prescott did when he took over for [Tony] Romo?

“Yes I do. Yes I do. I certainly think that’s possible.”

Will it be Prescott when he returns from injury? Or will Rush do enough to keep his place?