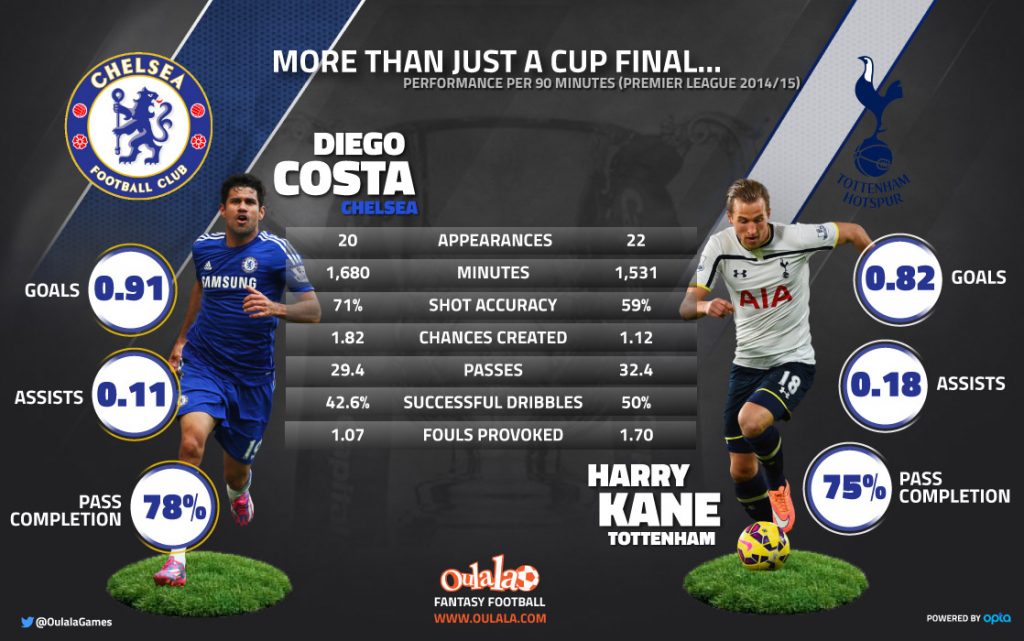 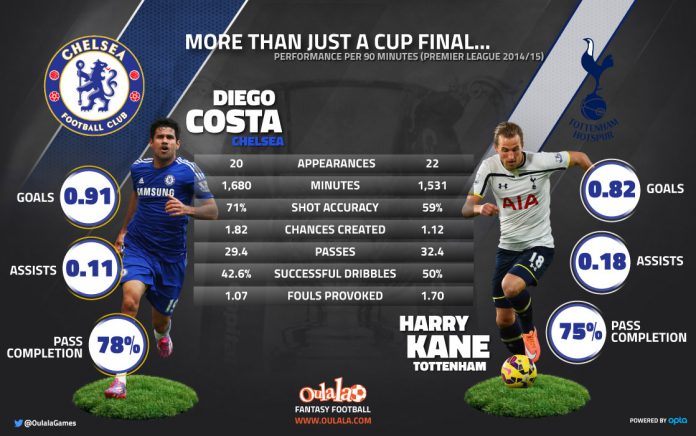 Two of the Premier League’s top strikers come face to face this Sunday in the Capital One Cup Final as Chelsea face bitter rivals Tottenham.

With both enjoying terrific campaigns this season, Opta-powered fantasy football game Oulala took a detailed look at forwards Diego Costa and Harry Kane in an attempt to identify the potential match-winner before Sunday’s showdown.

Costa currently leads the Premier League goalscoring charts alongside Manchester City’s Sergio Agüero, both on 17 goals a piece, 3 ahead of Kane who currently has 14 goals to his name. The Tottenham striker has however played fewer minutes. On a per 90 minute basis Costa still leads the youngster with a strike-rate of 0.91 goals to Kane’s 0.82. Costa also leads for shot accuracy with an impressive 71% of his shots on target compared to Kane’s 59%.

Creatively, Costa has also supplied more chances for his teammates than Kane (1.82 to 1.12) however has fewer assists from these with the Spurs forward excelling with an assist-rate of 0.18 to Costa’s 0.11.

The Spurs striker has made more passes per 90 minutes than Costa (32.4 to 29.4) but it is the Chelsea striker that has enjoyed the slightly better pass completion with 78% to Kane’s 75%.

When it comes to ability on the ball there is one clear winner. Harry Kane has completed 50% of his dribbles to Costa’s 42.6% and in the process has provoked more fouls (1.70 to 1.07).

Of the eight criteria investigated the pair could not be separated with both leading in four areas each. One thing that is clear is that with such terrific stats this season, both players should be at the core of the action which in turn should mean a very attacking game… and who doesn’t like goals?