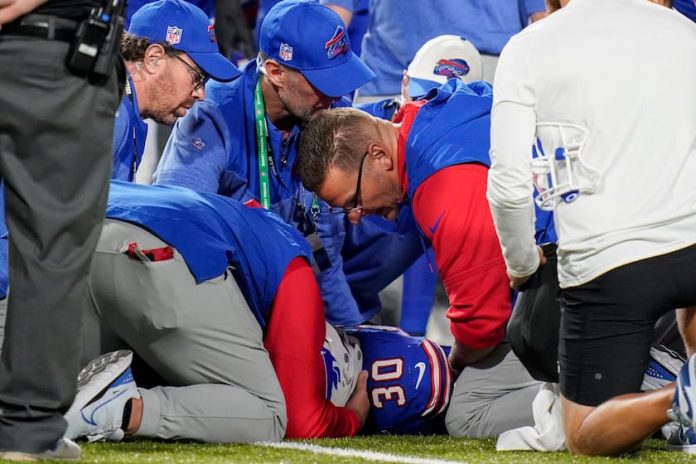 Buffalo Bills cornerback Dane Jackson left the field in an ambulance and underwent scans following a neck injury in Bills 41-7 win over Titans.

The injury occurred on second down, with under a minute remaining in the first half when teammate Tremaine Edmunds charged in and missed his intended target of Treylon Burks and slammed into Jackson, forcing his head and neck backwards.

The 25-year-old was quickly driven to the Ernie County Medical Centre in Buffalo where he was to receive a CT scan and an X-ray. The Bills happily reported he had full movement in his extremities.

Dane Jackson had to leave tonight’s game via ambulance after taking this hit pic.twitter.com/b8onIHCnUF

Bills fans will have been glad to hear the good news following the scary incident through coach Sean McDermott: “Dane Jackson has full movement in his extremities, which is good, but we are still awaiting more updates,

“I was able to see him in the ambulance at halftime and we are all sending our prayers to him.”

Further footage emerged of Titans running back Hassan Haskins attempting to push Jackson off his teammate while he was clearly in pain. Fans were quick to voice their opinion on Haskins actions.

What in the world is Haskins doing? Moving a player with a head injury can cost him. Incredibly awful scene by him. pic.twitter.com/C7O3CPvPj6

Haskins could have just made Jackson's injury a lot worse. Bad sportsmanship and no awareness! That's BAD karma.
Burks got lucky to dodge Edmunds unnecessary hit. 🙏 For Jackson.

Jackson exited the game whilst the Bills already had a commanding 17-7 lead, the Bills then went on to smash the Titans 41-7 moving them to 2-0 for the season. Their QB Josh Allen had an outstanding game and threw 317 yards and four touchdowns.