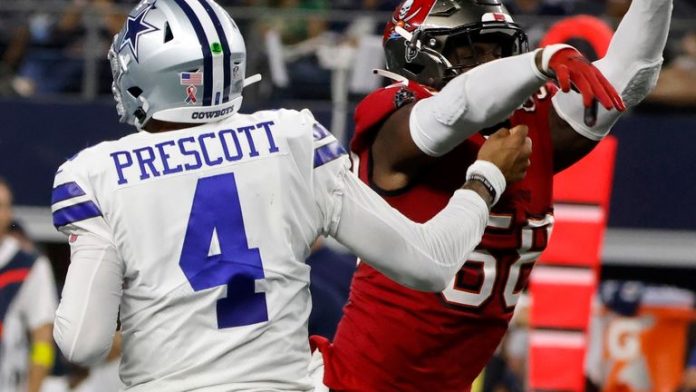 Dak Prescott has been out since week one for the Cowboys, and the team have provided an update on their QB.

Prescott injured his throwing hand’s thumb against Tampa Bay in the season opener. It was an injury that required surgery to fix the fracture to his thumb.

On Monday, Prescott had his stitches removed from his thumb, but the real issue is when will the swelling go down.

Prescott himself was unsure when he would return. At one point he stated that week four was his target, but later changed that to week five.

What are Dak Prescott’s Coaches Saying About His Return?

Speaking to the media on Tuesday, Mike McCarthy said:

“He still has some swelling that he has to deal with. Once he gets past the swelling and the strengthening stage, then he’ll get to the point where he’ll be able to throw,

“He’ll be dealing with more rehab this week and hopefully we’ll get the swelling and the strength where it needs to be. But I do not have a timeline on when he’ll start throwing.”

With the timeline looking foggy from both the player and coach, it may be some time before Dak is back leading the line.

How Are The Cowboys Doing Without Him?

Cowboys fans may have feared the worst when Dak was confirmed injured, but their replacement has done well.

Cooper Rush has been at the Cowboys for some time, via a slight hiatus at the Giants, and he has impressed. Rush became the first undrafted QB to go 3-0 in his first three games.

Rush has led Dallas to back-to-back wins. In the two starts, Rush boasts a 96.8 passer rating, completed 64.5% of his passes, and is averaging 7.26 yards per attempt.

Rush’s performances have even sparked a QB starting debate amongst fans and Jerry Jones. The latter suggested that Rush could challenge Prescott’s starting place.

The main concern for the Cowboys now is getting Prescott fit and ready to return to action.