Chelsea are looking to continue their excellent start to the season in another London derby as they go to Crystal Palace on Saturday.

José Mourinho’s side have taken 19 of a possible 21 points to start the 2014-15 season and start the weekend five points ahead of second-place Manchester City.

Crystal Palace were 1-0 winners in this fixture towards the end of last season under Tony Pulis. Neil Warnock’s side are only just above the relegation zone despite a favourable fixture list over the previous five games.

Neil Warnock doesn’t have too many injuries, although centre-back Scott Dann out for a month is a blow.

José Mourinho has been blessed with limited injuries to start their season. Ramires and Didier Drogba are still out whilst André Schürrle missed Germany’s 1-1 draw with the Republic of Ireland on Tuesday with the flu. Maybe the warmer weather in London will have helped him recover. 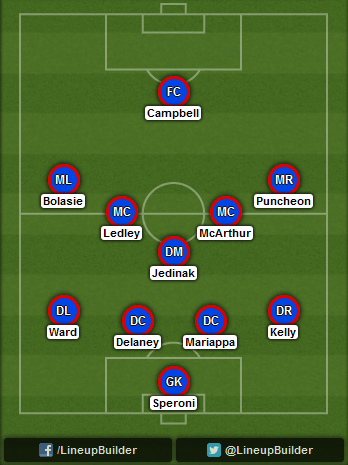 This looks like Neil Warnock’s lineup – hard to see who he would replace. He’s got a number of defensive players out there while trying to offer a counter-attack option down the wings with two pacey wide men. 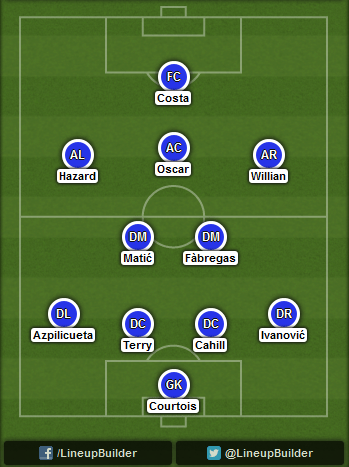 We think José Mourinho will go with his strongest possible lineup before resting any stars midweek to have the first-team fresh again for the weekend. Three points is important to him here with his next two Premier League away games at Manchester United and Liverpool.

Diego Costa vs Adrian Mariappa
Diego Costa played twice for Spain in their two Euro 2016 qualifiers to go against José Mourinho’s claims he needs a rest. Chelsea are at home to Maribor midweek so no need for the manager to rest any key players for this one.

Crystal Palace do have clean sheets in their last two home games (vs Leicester City and Burnley) but have conceded 12 goals in their other five matches. Chelsea shouldn’t have a problem breaking them down this season.

Eden Hazard vs Martin Kelly
Chelsea’s tricky left winger who has had success out wide and drifting into the middle. We’re not a big fan of Neil Warnock’s tactical ability and therefore expect Hazard to get the better of the Palace defence in the middle if he can’t beat Martin Kelly one on one.

Crystal Palace’s defence can be expected to be on their heels for the majority of the match so don’t be surprised if Hazard and co get the better of the one-on-one matchups at points during the game.

Cesc Fàbregas vs Mile Jedinak
Mile Jedinak was Crystal Palace’s defence before Tony Pulis took over last season. The holding midfielder continues to be a vital part of keeping the Eagles’ goals against tally down.

The Australian is in for a tough battle on Saturday though when the Premier League’s leading assist-maker Cesc Fàbregas is in town. Jedinak may be tasked with keeping the Spaniard quiet which would free up Oscar and co. Expect Jedinak to be shattered at full-time with the amount of ball chasing on his hands as Chelsea’s playmakers pass it about.

Prediction: Crystal Palace 0-2 Chelsea
Chelsea were surprisingly beaten here last season but we cannot see it happening again this weekend. The Blues are in better shape now, have a goalscorer up front and Crystal Palace aren’t looking as good as they were last season. Chelsea win.