As of right now Wayne Rooney already has 27 goals in all competitions, with 10 league games, a cup final and a possible few games in European competition to add to his tally, which I’m sure he will.

In fact he is on course to add significantly to his numbers for the season, he is without doubt one of the form players in the world at the moment.

He has already broken his previous record total of 23 with ease, and there are no signs of the Rooney juggernaut ending. Nearly a goal a game so far this season makes him very likely to reach astronomical figures.

But is he worth the hype?

So he may even get the 42 that Cristiano Ronaldo was so deservedly lauded for. He may even get more. This throws up the question, do United really miss Ronaldo that much? By the end of the season will we be talking about Rooney in the same breath that we did with Ronaldo in 07-08, when his gigantic haul guaranteed world player of the year status?

He is a raging bull of a player, with the determination that Roy Keane once had but with the finishing that the Cork native could only dream of. If Rooney gets himself over 42, will it still be fair to compare him to Ronaldo?

As loathesome as Ronaldo comes across, anybody who dismisses his qualities as a player is frankly, stupid! He has absolutely everything, the definition of the modern super player. If Rooney does equal or surpass his record I doubt that he would have made as big a mark as Ronaldo.

Ronaldo, you see, didn’t just get a remarkable 42 goals in one season, he got a remarkable 42 goals from the right of midfield. Of course he often ventured into a centre forwards position, but his base position was right midfield. Midfielders, center, attacking and wingers, getting 15, 20 goals a season is quite delightful for players, they can hold their head high. Ronaldo took the goalscoring midfielder into new territory. 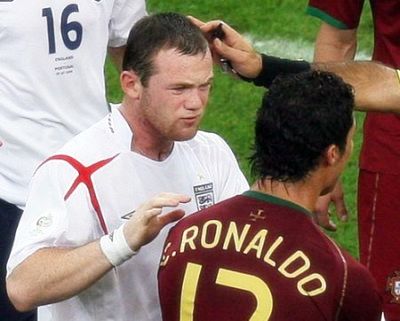 Rooney getting all his goals is a tremendous result, but not as impressive when you compare a centre forward to a right sided attacker.

Still, plenty can happen in the rest of the season to increase his importance in this personal race with Ronaldo. He can score more crucial goals, in the league, Europe and maybe even in the Carling Cup Final against Villa, but he’ll never be Ronaldo…

Whatever the case, here’s a reason to be cheerful

I must say I’m delighted about this new free scoring premier league campaign.

The soap drama and overstated importance of premier league players is always a topic for debate but the sole important thing of football is goals, goals and goals.

When once only Alan Shearer, Andy Cole and Thierry Henry got bucket loads of goals and left the also rans for dust in their respective free-scoring seasons, and other seasons where the top marksmen were finishing around the measly 18 goal mark, it good to see strikers like Rooney, Drogba and Defoe being unstoppable again!