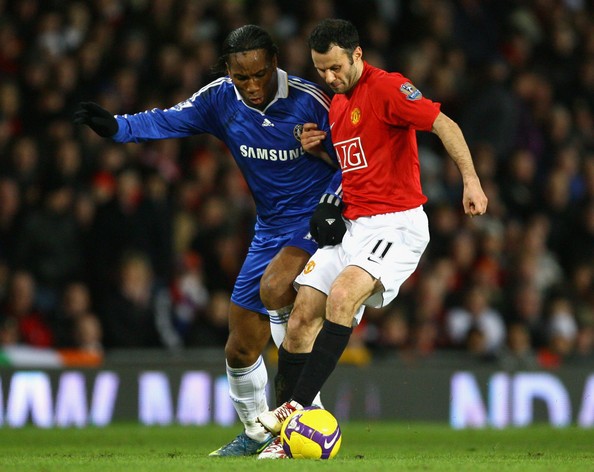 Soccerlens writer Oliver Neto looks at what might happen in the clash of Premier League powerhouses, Chelsea v Manchester United, in the Champions League quarterfinals.

ITV’s reliably philosophical approach to match previews does not disappoint, with Marcel Desailly’s classically Sartrean eye for the irrelevant ambling manfully through his broken English towards a fundamental point before Andy Townsend produces a verbal tackle reminiscent of his playing days to steal the initiative: ‘United are top of the table, but I tell you what, ‘ang on, Marcel, I tell you what, if they can get bodies in that United box and whip some balls into Drogba, Chelsea will fancy it tonight.’. Poor Marcel winces before brandishing a charming Gallic smile of acquiescence. Balls will be whipped in, Marcel, whether you like it or not.

Pitch-side, Carlo Ancelotti, having emerged from a mysterious puff of smoke, unfurls an enormous Cuban cigar before taking his seat in the dugout, putting his feet up and looking serious. Upon being asked to put out the offending item, the Italian replies, ‘This game may be in England, but I think you will find that this is a European fixture. Perhaps you forget my Champions’ League titles with Milan. My team was filled with ageing local heros, we underperformed dismally in the league and played much less attractive football than we were capable of. And I smoked cigars. Things will not change. I have coached AC Milan and now Chelsea. I have powerful friends.’

Sir Alex Ferguson’s esoteric vision of a ‘tough’ away tie should have offered a glimpse of what he had planned. United operate a conservative 4-6-0 formation, with Wayne Rooney as a left-winger-striker and Paul Scholes, Michael Carrick, Darren Fletcher and academy director Brian McClair packed into midfield. Antonio Valencia breaks a metatarsal in the warm-up but still starts on the right. Nani is benched.

Carlo Ancelotti lines up in what appears to be a straight 4-4-2. ‘They’re going for it tonight, Chelsea’ – Townsend.

16th minute: Michael Carrick begins smacking 50-yard passes in the general direction of Rooney. Rooney actually gets near one of them, and Branislav Ivanovic is forced to come and help Jose Bosingwa. ‘That’s what we expect from Carrick, for him to stamp his authority on a match like this – and Rooney’s work-rate has been absolutely sensational’ – Co-commentator Jim Beglin.

23rd minute: Bosingwa gives the ball straight to Rooney, who blasts a shot wide. ‘You just can’t keep Rooney out of a game like this!’ – Tyldesley.

31st minute: Nemanja Vidic and Didier Drogba go for a 50-50 ball near the touchline. Three minutes of furious shirt-tugging and shoulder-barging later, Drogba wins a throw. The remaining 20 players finish the spontaneous tea party begun during their wait and resume the game. Rooney feels particularly strongly that he should have been allowed more time to enjoy his Fondant Fancy, and makes his feelings known to a pitchside cameraman.

37th minute: Ramires brushes off Carrick and sends a poor cross into the box, but Vidic’s clearance hits Malouda in the face. The ball falls to Torres six yards out and he powers home a glorious finish. Chelsea are ahead, the champions are shaken and Torres’ Chelsea career is finally up and run… – Oh. Torres was about three yards offside. Nevermind, still 0-0, and there is now something to discuss at half-time.

Half-time arrives with neither side holding any significant advantage, but there have been lots of tackles and the referee has been surrounded by swearing players twenty-six times. So plenty for Marcel Desailly and Andy Townsend to discuss.

Desailly: I like Malouda. A lot. And Drogba. Drogba is playing really well. Did you say how he fought Vidic on the ball? Fantastique. And Evra. Evra is trying but he cannot play. Anelka stop him.

Townsend: Well, it’s been a little bit tetchy, little bit bitty – United come here tryin’a hold the line, keep Chelsea out and they’ve done that pretty well. Chelsea – little bit o’ nerves coming in but they started brightly, good understanding between Frankie Lampard and Ramires…I just think that if they can stop tryin’a pass their way through United and just get it out wide to Malouda, get some bodies in there to support Drogba, they can whip some balls in and put United under pressure. They’re cruising at the moment, United.

No substitutions, except for the chewing gum Sir Alex Ferguson has placed in his mouth, having scraped the previous one off the back of his right pre-molar and shamelessly stuck somewhere in David Luiz’s abundant mane.

56th minute: Ferguson sends on Ryan Giggs for Valencia, but orders Anderson to keep warming up.

60th minute: Rooney slaloms his way past Bosingwa and Essien before looping a cross over Cech, only for John Terry to fly in with an acrobatic header away from the waiting Giggs. ‘There’s just no stopping Rooney when he’s in this form!’ – Beglin.

63rd minute: As Anderson starts tucking in his shirt and jumping up and down on the touchline next to the fourth official, Paul Scholes lunges wildly and Essien and is sent off. Anderson sits down again.

70th minute: A long punt into the box from Ashley Cole isn’t cleared properly. The ball falls to Lampard in, who hits the bar. Clive Tyldesley screeches in shock that the normally effervescent Lampard should miss such an important chance.

81st minute: Sir Alex casually wanders over to the linesman and mutters something. The foreign linesman evidently doesn’t understand the insinuation, so the United manager holds up three fingers before shuffling off angrily.

85th minute: It’s all Chelsea by this point, with Kalou making inroads and having a couple of shots saved by van der Sar. ‘Chelsea turning the screw on United – can they hold out??’ – a breathless Tyldesley.

90th minute: Three minutes of injury time awarded. Ancelotti, impassive, lights a final cigar and asks David Luiz to come down from the stands so as to stroke his hair.

92nd minute: A long punt from Vidic leads to Rooney shrugging off Ivanovic before playing in Giggs, who hits the side netting after his shot is deflected. The referee whistles for full time. Sir Alex Ferguson is incensed, Ancelotti’s cigar runs out and he does not appear to find the gum in David Luiz’s hair, which by now will probably have solidified into a tough, lumpen mass. Much like the two teams on the field.

Watch out for the Chelsea v Manchester United preview on Tuesday, and you can win £100 simply by placing a bet through us!