Manchester United are close to landing their first major signing of the summer, after reports published in both English & Spanish press, that the Red Devils had trigged the €36m release clause of Spanish midfielder Ander Herrera. The Athletic Bilbao midfielder will reportedly sign a five-year-contract, while the deal is expected to be announced within Friday.

However, United probably will be looking to add one or two more midfielders before the transfer window ends. That means the probability of signing either of Bayern Munich midfielders Bastian Schweinsteiger or Toni Kroos can’t be ruled out completely. 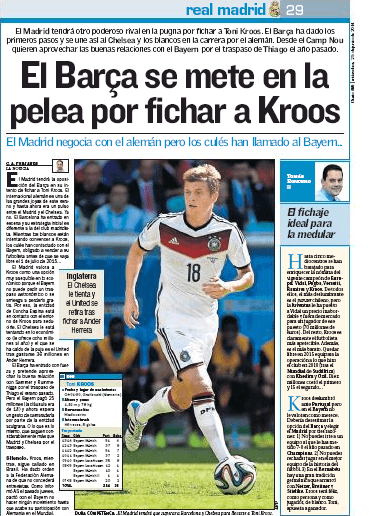 The 24-year-old Kroos has less than one year remaining on his contract and could leave the club in summer as Bayern are unwilling his accept his financial demands.

According to reports from Spain, Real Madrid coach Carlo Ancelotti wants the German maestro to marshall the midfield at the Bernabeu next season. Barcelona have been linked as well, but the Catalan press reckons, the Blaugrana will try to sign Koke instead.

Chelsea have joined the party as well and are willing to pay around €8m per year on a five year deal, which amount to €40m to secure his services.

The Blues have already signed Cesc Fabregas from Barcelona, but Mourinho wants to add marquee name to his side, as he looks to fill the void left by club legend Frank Lampard.

Spanish newspaper El Confidencial first reported Chelsea’s interest in Kroos, and now AS reports that the Londoners will fight hard with both the Spanish clubs to land Kroos at the Bridge this summer.

It remains to be seen whether Manchester United or Chelsea at all make any formal move for Kroos, who recently admitted that he will only decide his future after the end of the World Cup.