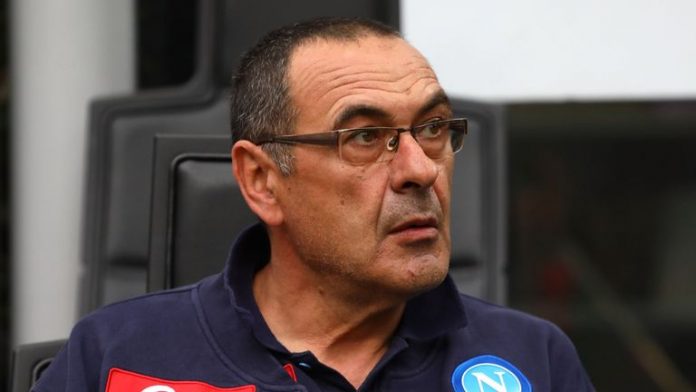 The Napoli chairman regularly took digs at Sarri throughout his three-year spell with the Serie A club, despite the 59-year-old improving the team in each of his three years in charge.

“I didn’t like it when he said that we both made mistakes, I don’t think I made any, ” he told Sky Sport Italy.

“I wasn’t wrong not to challenge him, even if it would’ve been most obvious thing.

“He had a contract, so I could’ve said something because he was acting in an unacceptable manner, going against players he didn’t think were very good.

“These players gave him a lot. He massacred them in his fantastic training sessions, but they always responded well.

“After that, he wanted to take my whole team to England and dismantle it. I had to lay down the law to Marina (Granovskaia, Chelsea director).

“He wanted Jorginho and I gave him away after I talked to (Carlo) Ancelotti, who told me he was banking a lot on (Amadou) Diawara and that he wanted to play (Marek) Hamsik deeper.”

Chelsea versus Napoli could be really tasty when they inveviatbly draw each other in the Champions League!

Southampton’s 3-0 friendly defeat against Derby County on Saturday certainly gives manager Mark Hughes much to ponder ahead of the new season. Hughes is 6/1 joint favourite to be the first Premier League manager to be sacked next term – worth a punt?

This fella thinks Hughes needs to smarten up his act.

I might be old fashioned – but if the manager can’t be arsed to shave and looks like he doesn’t care is it any wonder Saints were well below par?

So annoyed he needed two tweets.

I’d better write a part 2 then. Mark Hughes out, we have no good wingers, no good strikers, no good defenders and no good goalkeepers. Austin’s too inconsistent. Lemina’s our worse signing ever and bring Carrillo back from loan. ???

Can’t beat a bit of sarcasm.

Let’s have a laugh at Hughes’ biggest cheerleader.

Mark Hughes should be gone by Christmas

just another Hughes pre season shaping up at Southampton pic.twitter.com/8itDCxN3YE

In honour of Liverpool manager Jurgen Klopp’s change of heart regarding transfer fees, let’s have a bit of Bob Marley.

Everton have a big decision to make over Ademola Lookman, with RB Leipzig set to offer £17 million for the winger.

The 20-year-old spent the second half of last season on loan at the Bundesliga club, who want to sign him on a permanent basis.

Lookman has the ability to be make his mark in the Premier League. Selling him makes no sense if Everton are serious about improving next term.