Yes. Chelsea have reignited their interest in Porto’s Eliaquim Mangala, who is also a reported target of Manchester United and Manchester City.

The 23-year-old Porto defender was a reported target of both and Chelsea and Manchester United, but it was City who looked favourite to beat both of them for his signature.

During the January transfer window, The Times reported, City were in talks with the Portuguese club to land Mangala and his team-mate Fernando on the deadline day for a collective fee of £46m. 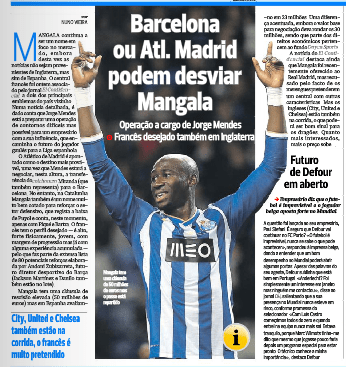 However, with City facing punishment from UEFA for breaching FFP rules, it remains to be seen, whether they can spend €50m odd on any player next season.

Chelsea signed Kurt Zouma in the January transfer window and suddenly their interest in Mangala almost cooled down. All we heard and read was two Manchester based clubs fighting for the Frenchman.

David Luiz might leave the club in the summer, which could prompt Jose Mourinho to bring in a quality defender. Portuguese newspaper A Bola reports that Chelsea along with Man City and Man Utd have recently shown an interest in the player.

After being associated to English clubs for long, it is now rumoured that Barcelona or Atletico might hijack Mangala’s deal.

Atletico is seen as the the most probable destination since Jorge Mendes is allegedly working on Miranda’s transfer to Barcelona at the moment. He also fits what Barcelona are looking for to reinforce their defence and is part of Zubizarreta’s list of possible reinforcements.

The player has a release clause of €50m but in Spain he’s rated at around €25m only, although the more clubs circling around him, his value is bound to increase. He was reportedly offered to Real Madrid recently but they refused since they are looking for a centre-back with different characteristics.