Premier League giants, Chelsea, are planning to make a move for the Real Madrid midfielder, James Rodríguez, when the transfer window opens in January. Antonio Conte, the Chelsea manager, wants to bolster his attacking-midfield area following Oscar‘s departure, and the Italian has identified Rodríguez as the perfect player to fill the void.

Rodríguez joined Real Madrid in 2014 after largely impressing in the 2014 World Cup in Brazil, where he played a key role in taking Colombia to the quarter-finals. He made an instant impact at Madrid, scoring 17 goals in his first season.

However, his situation has changed drastically in the last 18 months. He has dropped down the pecking order at the club, and doesn’t feature in the first team plans of Los Blancos’ manager Zinedine Zidane. James has previously vowed to fight for his place at the club, but having made only four starts in La Liga this season, the former Monaco midfielder feels the time is right for him to move on. 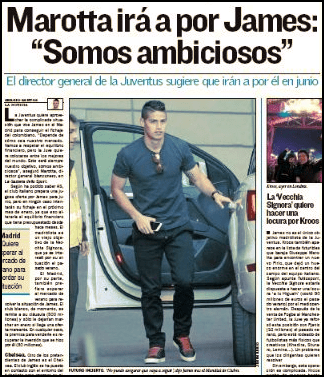 Chelsea have shown a strong interest in the Colombian, and the Blues are keen to sign him in January. Although Real Madrid are eager to keep hold of him till the end of the season, they will probably not block his move if the club receive an offer in excess of £60m.

According to reports from AS, Chelsea have made contacts with the player’s agent to enquire about his situation. The Blues, however, are likely to face competition from Manchester United, as José Mourinho is also looking to sign a world-class attacking-midfielder to his ranks.

Rodríguez would be a superb signing for Chelsea. He would add creativity from the centre, and provide Chelsea an extra edge in their attacking department. For a player of his ability, he should be playing regularly at a top European club.

A world-class player in his own right, there is no doubt about his potential. The only thing he needs to work on is his attitude. His career at Real Madrid is as good as over, and he should be considering leaving the club at the earliest opportunity.