Chelsea looks towards Pjanic and Fellaini in order to replace Lampard 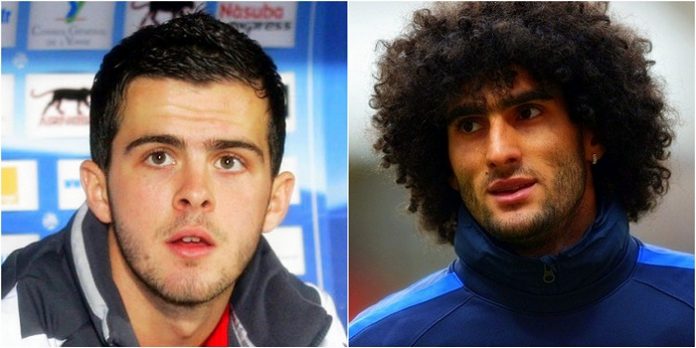 Chelsea are looking at Miralem Pjanic and Maroune Fellaini as possible replacements for Frank Lampard, who is expected to leave the London club at the end of this season.

Frank Lampard is a living legend of Chelsea football, but like all good things, his career at the London club is perhaps heading to towards its end. The midfielder is in the final year of his contract and Chelsea are yet to offer him an extension.

According to reports, Chelsea are shaping up for a major restructuring of the squad, which could see some of the veterans leave the club at the end of this season and Frank Lampard’s departure is almost a certainty.

Roman Abramovich is expected to spend big once again in the winter transfer window, with stars like Falcao reportedly being courted by the club. But Lampard’s departure is certain to leave a big hole in the midfield and Chelsea have already lined up his potential long term replacements.

Miralem Pjanic is one of the names that has been linked with a move to Stamford Bridge. According to recent reports, the 22-year-old midfielder has drawn interest from two London clubs – Chelsea and Tottenham.

Pjanic has been in fine form for AS Roma this season and has been a regular fixture in the first team. The Bosnian international already has 37 caps for his national team at such an young age and is expected to achieve greater things in future.

Pjanic rose to prominence while playing for Luxembourg in the 2006 European U-17 championship. Later he chose to represent Bosnia in the international stage. He made his mark in the French league with Lyon, before joining Roma in 2011.

Pjanic has recently played down the rumours linking him to Chelsea, although he has stated that the interest from the reigning European Champions has ‘flattered’ him.

Pjanic was quoted in press:

“I am flattered to be linked with a team such as Chelsea, a European Cup winner, but I have a contract here at Roma.

“Could I replace Frank Lampard? He is a legend there. He has done so much for the club and I hope to achieve such feats myself one day.”

The 22-year-old still has three years left in his current contract and Roma is said to value him at €13 million. While Spurs are unlikely to compete with Chelsea financially in the transfer market, it remains to be seen if the Blues choose him over Maroune Fellaini, their other transfer target.

Marouane Fellaini has been one of the most impressive players in the Premier League this season and David Moyes is finally getting the best of the big man. The Belgium was recently in the news for head-butting Stoke City defender Ryan Shawcross, which has earned him a suspension.

Everton have made one of the best starts to an English Premier League season in recent years and Fellaini has played a large role in it. The Belgium international has already scored eight goals and provided three assists in 15 appearances for the Merseyside club.

His improved goal scoring record would certainly have drawn Chelsea’s attention, who are looking to replace a midfield goal scoring machine in Frank Lampard (although in recent seasons he has played in a much more defensive role).

Chelsea’s other midfield target Paulinho of Corinthians, who recently won the Club World Cup defeating the Blues in the final, has already stated his desire to stay at the Brazilian club, so one can expect Chelsea signing either of Pjanic or Fellaini before the winter transfer window closes.