Blackpool will take on Cardiff City this afternoon in what is being dubbed ‘the richest game on the planet’, and for very good reason.

According to those good folks over at the Sport Business Group at Deloitte (who are not to be argued with on matters such as these), this afternoon’s match is worth approximately £90 million to the victor.

The match in question is, of course, the Championship Play-off Final. The culmination of a season’s-worth of toil and struggle (on and off the pitch in Cardiff’s case  – more on that later) that will see the eventual winner promoted to the lucrative milieu of the Premier League.

Blackpool: It’s fair to say that Ian Holloway’s men have exceeded all expectations this season. Before the 2009-10 campaign got underway, unfashionable Blackpool were many-an-outsider’s instant relegation candidates, and the general consensus amongst the Seasider’s own support was that a mid-table finish was about all they could expect come May.

However, the appointment of Holloway seemed to open Blackpool up. He instilled an attacking ethos in his players that has seen them systematically brush aside their ‘also-rans’ tag and  go in to today’s showpiece as the in-form side, finding themselves on a five-game unbeaten run. 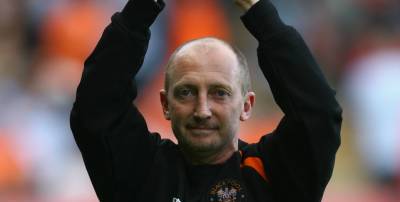 Cardiff: The Welsh side have had their fair share of turbulence this season – facing multiple winding-up orders in court over a £1.9 million debt owed to HM Revenue and Customs – but their off-field distractions have had little bearing on the team’s performance.

Dave Jones men secured their play-off spot with weeks to spare, and looked solid when called upon to dispatch Leicester on penalties in the play-off semi-finals…

Play-off Semi Finals: By slugging their respective ways through 46 rounds of league games, coupled with the additional two-legged play-off semi-final encounters, Blackpool and Cardiff have now found themselves on the cusp of promotion to the top tier of English football – Blackpool for the first time since 1971, and Cardiff for the first time since 1962.

While Cardiff secured fourth position, and their spot in the play-offs, with a few weeks to spare, Blackpool left it until to the last round of Championship fixtures.

A 1-1 home draw at Bloomfield Road against Bristol City – ironically coupled with their Cardiff’s bitter rivals Swansea failure to beat Doncaster – meant that they Blackpool would meet Nottingham Forest in the first of the play-off semi-finals.

Again starting the game as underdogs, the Tangerines took a 2-1 first-leg advantage to the City Ground and eventually secured a dramatic 4-3 win (6-4 on aggregate) over Forest, with on-loan striker DJ Campbell notching a hat-trick in the process.

Cardiff’s passage to Wembley was also fraught with drama, the Bluebirds requiring a penalty shoot-out to deny Leicester City after being tied 3-3 on aggregate following 180 minutes and extra-time. Goalkeeper David Marshall was the hero, saving two Foxes’ penalties in a 4-3 victory, but Cardiff fans cannot deny that Leicester midfielder Yann Kermorgant played his part – following his disastrous (skip to the 3.20 mark) chipped effort.

Charlie Adam – The former Rangers man has notched 18 goals from midfield this season, and is the driving (and creative) force behind most of Blackpool’s attacking play.

DJ Campbell – A striker, bang in form and with a point to prove. Helped secure Blackpool’s place in the final with a superb hat-trick in the semi-final second-leg against Forest.

Seamus Coleman – The young Irish right-back, who is currently on loan at Blackpool from Everton, has seemingly boundless energy and his relentless raids down the right flank with no-doubt prove dangerous once again.

Ian Evett – The rock at the heart of Blackpool’s sturdy defence. The tall, powerful center-half is committed in the air at both ends of the field. 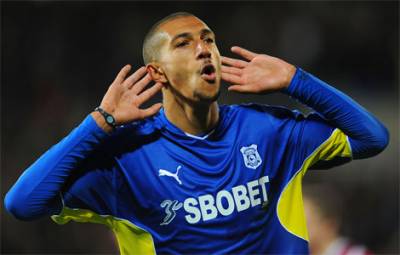 Jay Bothroyd – The ‘Heskey’ of the Championship

Michael Chopra – How can you overlook a poacher like Chopra? The former Newcastle striker has scored yet another hat-ful of goals in the league this season.

Peter Whittingham – Speaking of goals, winger Whittingham is the joint top-scorer in the Championship this season with 2o goals, including a wonderful free-kick in the semi-final against Leicester.

Jay Bothroyd – The Emile Heskey of the Championship (the only difference being Bothroyd actually scores once in a while). Leads the line with authority and his hold-up play often sees the ball to stick to him like velcro.

Joe Ledley – Operates as the string puller in the middle for Cardiff. The 23-year-old Welshman has been attracting interest from a myriad of Premier League clubs for the past couple of seasons now.

Prediction: Although both Blackpool and Cardiff have been relatively high-scoring during the regular season, I think you can expect this afternoon’s clash to be a tight and tense affair – as so much is on the line for both sides.

Both clubs are prone to the odd defensive lapse now and again, and with Blackpool set to continue with their tried and tested 4-3-3 formation, the pressure (numerically at least) would appear to be on the Cardiff back four.

However, Cardiff forwards Bothroyd and Chopra are an effective partnership – the former doing the majority of the ‘donkey’ work and the latter using keen movement and a striker’s eye to get into continually dangerous positions – so the Blackpool defence can also expect to have plenty of questions asked of them.

As a neutral, I am hoping that the conservative mindset, that can mire ties such as this, doesn’t take hold – and both clubs attack with the fervor that they have both respectively displayed so often this season, giving us the kind of open and free-flowing match that showpiece events, like the Championship Play-off final, richly deserve.