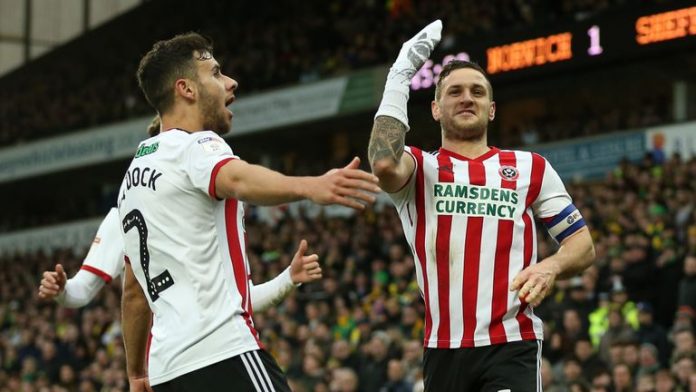 With just two games to play there are still a trio of teams hoping to secure automatic promotion from the Championship this season.

Norwich City have a three point lead over Sheffield United, while Leeds United are a further three points adrift in third place.

All three sides are at home this weekend, with Leeds facing the most difficult task as they go head-to-head with Aston Villa at Elland Road.

Read on as we look at whether there could be a late twist in the promotion race.

Norwich not certain of title just yet

With a six point gap to third-placed Leeds the Canaries be promoted automatically, but they are far from certain to go up as champions.

Norwich face in-form Blackburn Rovers (H) and Villa (A) in their last two matches needing four points to guarantee themselves the title.

Rovers have won four on the spin, while Villa have reeled off 10 victories in a row, highlighting the size of the task Norwich face.

They should claim top spot from this position, but it would be no surprise if both Rovers and Villa took points from their respective matches.

Blades could pinch the title

United’s 1-0 victory over Leeds at Elland Road back in March was undoubtedly the game that proved Chris Wilder’s side were genuine promotion contenders.

They were excellent over the Easter weekend, winning 2-0 at home to Nottingham Forest and 3-0 at Hull City.

The Blades host already-relegated Ipswich Town this weekend, before travelling to face Stoke City on the final day.

With a slightly better goal difference than Norwich, the South Yorkshire side could still sneak in and pinch the title.

Marcelo Bielsa’s side looked certainties for automatic promotion prior to Christmas, but just 10 wins in 19 matches since December 29 has derailed their challenge.

Defeats in their last two matches against Wigan Athletic and Brentford appear to be the final nail in the coffin, particularly with the Blades looking a good bet to beat Ipswich this weekend.

Leeds face Villa at Elland Road on Sunday lunchtime and their fate could virtually be sealed by kick-off time.

A final day visit to Ipswich should be easy enough, but it would be a brave move to back Leeds to win promotion via the play-offs given their recent form.