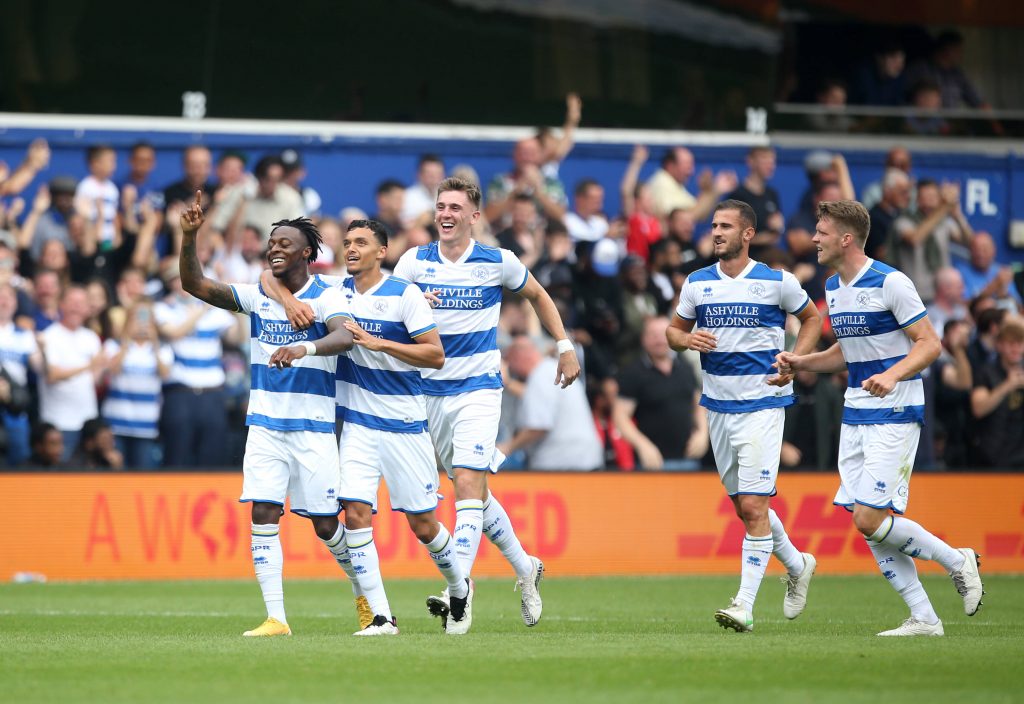 There are usually six teams expected to challenge for promotion at the beginning of the Championship season – the three teams who have just been relegated from the Premier League, and the three who missed out on promotion through the play-offs.

Of course, it’s not always the relegated sides and play-off teams who contest for promotion.

Every season, there are usually a few sides who climb from mid-table obscurity and get themselves in the frame for the top spots.

Queens Park Rangers are one of the sides gaining some attention. They finished in ninth place last campaign, but that doesn’t tell the full story.

Their first half of the season was a bit of a nightmare, and they found themselves in a relegation battle.

But this all changed with the arrivals of Charlie Austin, Sam Field, Stefan Johansen and Jordy de Wijs in January on loan.

After their signings, the Rs enjoyed a massive upturn in form. In fact, only Norwich City and Watford accumulated more points in 2021.

Now, those four have been signed on a permanent basis, along with five other new faces. Meanwhile, no one too important has been let go, with the most significant departure being Tom Carroll.

Furthermore, QPR have enjoyed a highly productive pre-season. They emphatically defeated Manchester United 4-2, and played out an exhilarating 3-3 draw with an almost full-strength Leicester City.

In eighth place were Cardiff City, who found themselves on the brink of the play-offs going into the final ten games of the season before being let down by a disappointing finish.

Loanee Harry Wilson has gone, which will obviously have a negative impact in Wales. However, the arrival of Luton Town’s James Collins will be useful.

Alongside 20-goal star striker Kieffer Moore, the pair could be one of the most threatening duos in the Championship.

In Mick McCarthy, the Bluebirds have one of the most experienced managers in the league. He has twice won the Championship title, although the most recent of these came in 2009.

The 72-year-old currently holds the record for the most promotions in English football with eight, reaching the top flight in half of these. With a record like that, you’ve always got a chance.

Warnock tends to guarantee some degree of defensive stability, but there will be question marks over whether the northerners will have enough firepower to compete for the play-off places.

Striker Britt Assombalonga was sold to Adana Demirspor and has since been replaced by Wycombe Wanderers’ Uche Ikpeazu.

The Ugandan struggled to make an impact in the second tier last season, scoring just six in 31 outings.

Millwall finished the campaign in 11th, enjoying a strong second half of the season. If they can push on from this, they may be able to challenge for the play-offs again.

Manager Gary Rowett has a bit of a mixed reputation in the Championship. He was a highly rated figure during his time at Birmingham City, but wasn’t able to get Derby County to the Premier League and struggled at Stoke City.

However, his time at The Den has been mostly positive, narrowly missing out on the play-offs in his first season, and following this up with another top-half finish.

The loss of loanee Ryan Woods will be a blow, given that he was a regular for Rowett over the last two seasons.

However, former midfielder George Saville made his return to the Lions this summer. It was at the east Londoners where he enjoyed his best spell, and if he can get back to this level then he will be an ample replacement.

If they are to compete for the top six, they will need winger Jed Wallace to be on top of his game.

The 27-year-old has scored 21 and assisted 18 in the last two league seasons. If he maintains this form, he could be a standout.

One team that could be a surprise package are Birmingham City, who finished in 18th last term.

This may seem like a poor showing, but most of the damage was done under former manager Aitor Karanka, who had them well in a relegation battle before his sacking in March.

The Spaniard was replaced by Lee Bowyer, who kept them up with ease. During his short managerial career, Bowyer has developed a decent reputation, taking Charlton Athletic up to the Championship via the play-offs despite the club being a complete mess.

Coming with him from The Valley is 15-goal forward Chuks Aneke, who will be expected to score the goals for the Blues.

Also arriving are Manchester United youngster Tahith Chong on loan, and former Brentford midfielder Ryan Woods. If these players can perform to their best, it will give Birmingham a good chance of fighting for the top six.

Coventry City are another side potentially going under the radar. Only five teams got more points from their final ten games last season, putting them in high spirits going into the new campaign.

Manager Mark Robins has already achieved two promotions with the Sky Blues, and could have his eyes on a third.

He hasn’t been able to do much business in the transfer window, but experienced forward Martyn Waghorn will be a welcome addition to his roster.

No one really wants to finish mid-table. Going into the final months of the season, knowing that you won’t go up or down, not particularly caring if you win or lose – it’s all quite dull. Unfortunately, someone has to be there.

Last season, Reading narrowly missed out on the play-offs, finishing in seventh place. Veljko Paunovic will be hoping to challenge again this time around.

At the beginning of the term, the Royals threatened to run away with the league title, picking up 22 points from their opening eight games.

Of course, this form didn’t last, and they soon found themselves way off the pace in the race for promotion.

Frankly, it’s not been a good summer at the Madejski Stadium so far. No one has been signed, while key players such as Michael Olise, Omar Richards, and Alfa Semedo have all exited. It’s difficult to see them doing well this season.

Last season was fairly hectic at Nottingham Forest, using 32 different players in the league alone. And the result of all this tinkering? An underwhelming 17th place finish.

A number of these were loan players who have returned to their parent clubs.

Man Utd’s James Garner was one of these, as were Cyrus Christie, Luke Freeman, Filip Krovinovic and Anthony Knockaert. Veteran forward Glenn Murray retired, and winger Sammy Ameobi made the switch to Middlesbrough.

As for incomings, American goalkeeper Ethan Horvath has been signed from Club Brugge, and Olympiacos midfielder Cafu has made his loan move permanent. At the time of writing, they are the only two new additions at the City Ground.

Several players leaving, with not many replacements? It doesn’t bode well for Nottingham Forest.

However, with a manager like Chris Hughton at the helm, they should have enough to keep clear of relegation danger.

Stoke City were well in with a shout for promotion halfway through last season, finding themselves just three points off the automatic spots in early December.

However, a long-term injury to talisman Tyrese Campbell took its toll, and they ended up in 14th.

The 21-year-old isn’t expected to feature for another few weeks, but once he returns, he could be a vital part of Michael O’Neill’s squad should he be able to get back to his best. Whether or not he will be as good as before remains to be seen.

The sale of youngster Nathan Collins to Burnley will obviously make a difference. They have signed promoted pair Ben Wilmot and Mario Vrancic, but this likely won’t be enough to fire them up the table. Another season of consolidation is looking probable at the moment.

Preston North End are a tough one to predict. Last season, they finished in 13th place – 16 points off the play-offs and 18 clear of the drop zone.

They’ve got a squad comfortably capable of staying in the division, but need a big improvement to compete for the top spots.

But that was under former manager Alex Neil. The Scotsman resigned in March, with the club in 16th.

He was replaced by assistant Frank McAvoy, who took interim control for the final few weeks of the campaign.

McAvoy’s stint was good enough to convince the club’s hierarchy to hand him a full-time contract, winning five and losing just one of his eight games in charge.

If he can maintain this form, he could push for promotion, but this may have just been a good run of form.

As for Luton Town, they ended last season just inside the top half, residing in 12th. One of the main problems they faced was scoring goals, as only five teams scored fewer than their 41 last season.

Things could be about to get worse in this department, following the transfer of striker James Collins to Cardiff City.

The Englishman has been their talisman for a while, scoring 72 goals for the Hatters in the last four campaigns.

Veteran forward Cameron Jerome has been recruited from MK Dons off the back of a respectable season in League One, but he is looking a long way past his best, and likely won’t be enough to replace Collins.

Henri Lansbury has also been brought in to Kenilworth Road this summer, arriving from Bristol City on a free transfer.

Once considered one of the brightest players in the Championship, it should be interesting to see how much he has left to offer.

Manager Nathan Jones has got a good record with Luton in the EFL, guiding them to promotion from League Two and taking them into the automatic spots in League One before leaving for Stoke City.

And, after a tough time at the Britannia Stadium, he came back to the club when they were in deep trouble and kept them up, before taking them to mid-table the following year. Jones will be their best chance of survival this season.