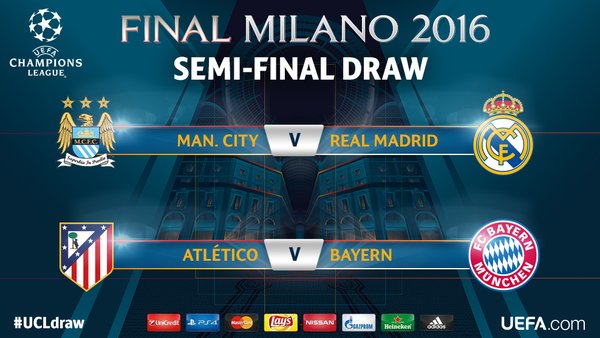 The UEFA Champions Semi-finals draw took place in Nyon, Switzerland this afternoon and here are the fixtures as the remaining four teams battle it out for Europe’s top honours.

The Champions League final will be played on the 28th of May 2016 in Milan.

I saw nothing from Real Madrid’s two legs against Wolfsburg to suggest Man City can’t beat them.

Los Blancos did brilliantly to turn their tie against Wolfsburg around and will be looking for their eleventh Champions League crown this season.

This is the first time Manchester City have made it to the semi-finals of the Champions League and will be looking to take advantage of Real Madrid’s inconsistencies when the two sides meet later this month.

Diego Simeone’s side eliminated the competition’s favourites Barcelona in the last round and will fancy their chances against Bayern Munich.

The Germans have not been at their best since the turn of the year and will need to improve significantly to get past the Spanish outfit.