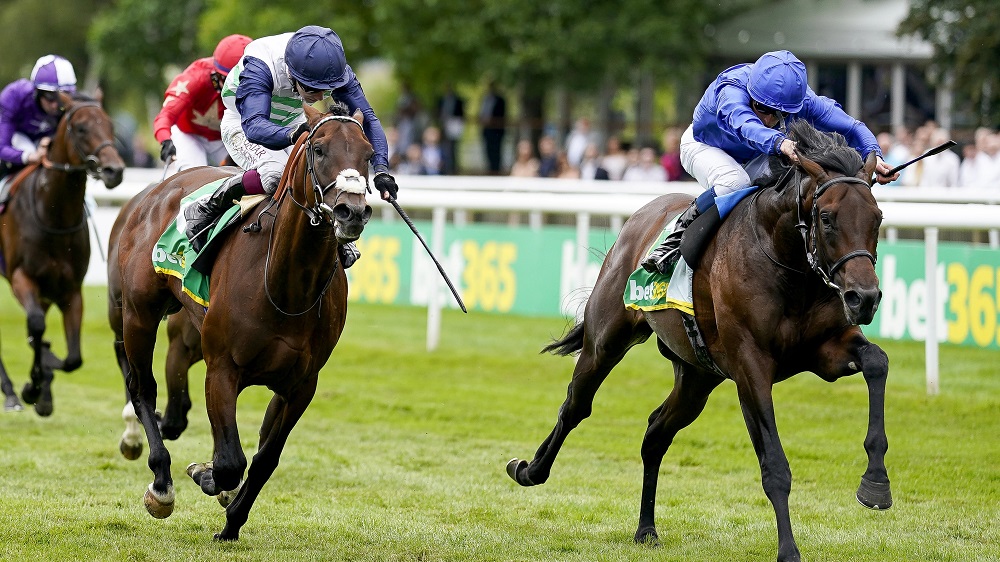 The Cesarewitch Handicap over 2m 2f at Newmarket is the big betting race from their Future Champions Festival. While much of the focus over the two days is on juveniles, this Heritage Handicap on Saturday, 9 October (3:35) is all about the stamina of older horses.

With a maximum field of 34 runners declared, the Cesarewitch horse race is one of the largest in Britain. Taking place at the Headquarters of UK Flat horse racing on the Rowley Mile course, there are no hiding places. What do past Cesarewitch results reveal about the contest? Let’s find out!

All of the last eight Cesarewitch winners had an age between four and seven. That doesn’t eliminate many from contention, so it usually takes a horse with a rating of 86 or more. Those two Cesarewitch trends brings the field down by a third.

Five of the last eight victors ran at most five weeks before the race, but only one within a fortnight. Last year’s winner had a longer absence, so it is possible to lay one out and win the Cesarewitch Handicap at Newmarket. However, race fitness is clearly vital.

One of the key prevailing Cesarewitch trends is a draw in middle of the track. All but one of the last eight winners came out of stalls 13-24. Such stats come with no guarantees, but they should help punters narrow the field down and make this puzzle easier.

Why M C Muldoon is favourite in the Cesarewitch betting

Irish jumps trainer Willie Mullins loves this race. He has trained each of the last three Cesarewitch winners. Those buck some of the above trends, however, in that each had 34 days or more since their last run. Another common denominator with the Mullins mounts was a run at the Galway Festival, either over hurdles or on the level.

M C Muldoon did just that and won at Irish horse racing’s premier summer meeting. Prior to that, the six-year-old Mastercraftsman gelding ran at other major events in the UK and Emerald Isle. His plugging on second to Echoes In Rain in a Grade 2 novice hurdle at the Fairyhouse Easter Festival is strong jumps form.

The winner went on to Punchestown and scored at the highest level, completing a hat-trick of graded successes. Prior to her meeting with M C Muldoon, Echoes In Rain also defeated subsequent County Hurdle and Aintree Grade 1 hero Belfast Banter at Naas. M C Muldoon then hit the frame at the Punchestown Festival and Royal Ascot.

Just a short-head separated him and re-opposing rival Reshoun (50/1 here) in the Ascot Stakes. M C Muldoon was denied a clear run approaching the final furlong, so can be marked up. Ryan Moore, who rode him that day, is back in the saddle too. Provided a 71-day absence hasn’t left him needing this, M C Muldoon is the 5/1 favourite with Unibet for Cesarewitch glory.

Mullins has other irons in fire

Closutton maestro Mullins has six horses in this year’s race. Many of those are in with big shouts too, according to the Cesarewitch odds on offer. Burning Victory, the beneficiary of Goshen’s final flight unseating in the 2020 Triumph Hurdle, has made a couple of successful raids over to France either side of a crack at the Galway Hurdle.

The five-year-old daughter of Nathaniel landed a valuable handicap at Deauville on her last outing. Burning Victory spent 414 days on the sidelines after her fortunate Cheltenham Festival triumph, so definitely needed her return to action in the Mares Champion Hurdle at Punchestown. She was also far from disgraced when a seven-length seventh to Saldier in Galway’s big hurdle race.

As the winner has since followed-up in Grade 3 company, that form reads well. The fact that Burning Victory has also won her two Flat starts for Mullins, and is still 1lb well-in despite a penalty, means there could be more to come. She is 11/1 with Parimatch and prominent in the Cesarewitch betting with good reason.

Other Mullins mounts in this include Forevos (25/1), who runs off an eye-catching 87 rating following success at the Curragh and then a gallant second in the big staying Flat handicap at Galway. Whiskey Sour (25/1) and last year’s winner Great White Shark (20/1) will probably need the run after lengthy lay-offs. Micro Manage (20/1) is high in the weights after winning at Galway, but has Irish champion Flat jockey Colin Keane aboard.

Back Burning Victory with Parimatch

Draw against Buzz and Calling The Wind

There are always winners and losers with the draw in races like these. The Cesarewitch trends above say coming out of stalls in the middle is an advantage. Two prominent betting contenders in Buzz and Calling The Wind have low and high draws respectively. The former is trained by Nicky Henderson and didn’t win beyond 1m 4f when in the care of Hughie Morrison.

Buzz, now a seven-year-old, ran in some of the big handicap hurdles last winter. His third to Sceau Royal in the Welsh Champion Hurdle around this time last year stacks up. The winner went on to land the Elite Hurdle at Wincanton and Game Spirit Chase at Newbury later in the campaign. Buzz also finished in front of subsequent Scottish Champion Hurdle winner Milkwood, runner-up in the Galway Hurdle since, that day at Ffos Las too.

A career best over hurdles came last time out when runner-up to Abacadabras in the Grade 1 Aintree Hurdle. Buzz has a racecourse absence of 184 days as well stall six to overcome in the Cesarewitch Handicap now. However, connections mean business with British champion Flat jockey Oisin Murphy booked for the ride. Buzz is 7/1 with Boylesports to defy his low draw and time off the track.

Bet on Buzz with Boylesports

Goodwood Handicap hero Calling The Wind has a similar problem out of stall 27. Extreme distances on the Flat clearly suit Richard Hughes’ charge. Calling The Wind chased home Stratum in the Queen Alexandra Stakes at Royal Ascot off 91. He may be 3lb well-in to the Cesarewitch off a 100 rating and in-form with that Glorious Goodwood success and then a fine second over too sharp a trip at Newbury, but the draw could scupper his chances. Calling The Wind is 8/1 with Parimatch to not let that stop him.

Support in Cesarewitch odds for Prince Alex and Scaramanga

A couple of old favourites step up in trip here. Prince Alex comes out of stall 20 that produced Cesarewitch winners in each of the last two seasons. Now trained by Michael Bell, this four-year-old Excelebration gelding needs rain to hit Newmarket. Prince Alex landed the Summer Handicap over 1m 6f at Glorious Goodwood and now goes beyond that distance for the first time.

This is unknown territory stamina-wise but his damsire was the great Montjeu. The distaff side of Prince Alex’s pedigree includes Fame And Glory, whose progeny get trips over obstacles. He is off 4lb higher than his Goodwood success, but there could be more to come if there is enough endurance. Prince Alex is 18/1 with William Hill to land the Cesarewitch Handicap for a stable that does so well with its Flat stayers.

Back Prince Alex with William Hill

Scaramanga, meanwhile, has won decent handicaps in both codes this year. Trained by Paul Nicholls, who targets this time of year to start firing on all cylinders, this six-year-old by Mastercraftsman won over hurdles at Newbury and Sandown in the spring. Those victories earned him an official rating of 151 in that sphere.

A revised Flat mark of 93 after winning at Newbury on the level in July still looks exploitable in relation to that. Scaramanga seemed too prominent in the run when bombing out at York and ninth last time out. It could be worth forgiving him that.

Runner-up Rajinsky (40/1), and the fifth, sixth and seventh home – Island Brave, Prince Imperial and Themaxwecan (66/1) – have all won since. Those re-opposing here all have bigger Cesarewitch odds than Scaramanga, who is 28/1 with Parimatch to bounce back.

A shortlist is extremely difficult in a race like the Cesarewitch Handicap, even for the experts. Backing horses each way is strongly advised with the best betting sites paying six, seven or maybe even eight places here. Honourable mentions go to Live Your Dream for Godolphin, who has a high draw, and Elysian Flame, off the track for 71 days, as both are fairly prominent in the Cesarewitch betting this year.