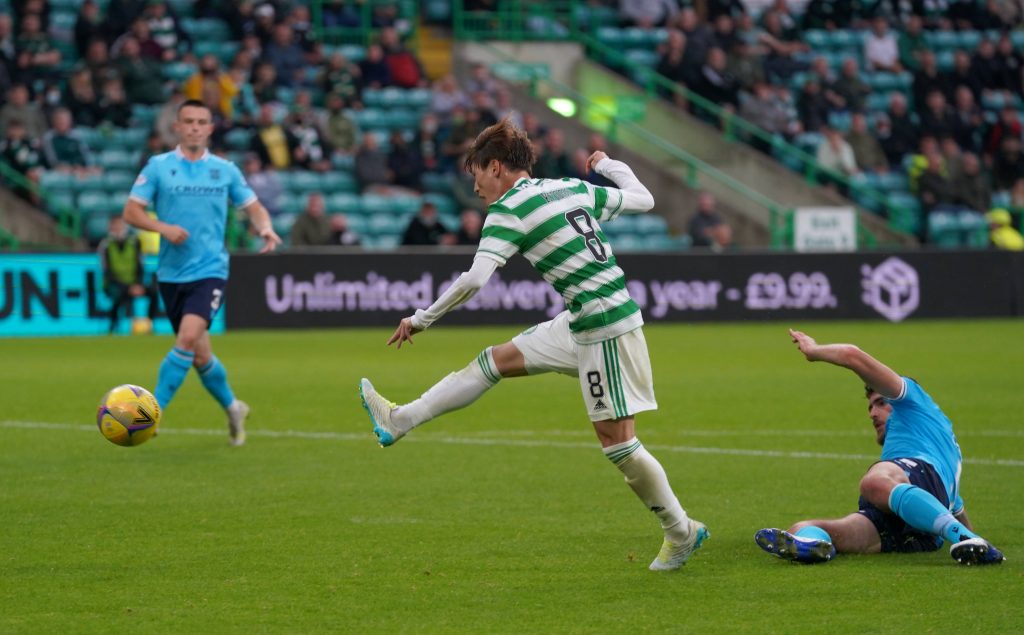 Celtic picked up a comfortable 6-0 win over Dundee in the Scottish Premiership on Sunday and their summer signing Kyogo Furuhashi put on a spectacular show for this new team.

The Japanese attacker scored a hat-trick for the Hoops. Tom Rogic, Anthony Ralston and Odsonne Edouard bagged Celtic’s other goals.

After the opening day defeat against Hearts, Ange Postecoglou needed his side to put on a strong performance and secure a comfortable win.

The 6-0 win over Dundee will give Celtic enormous confidence and a morale boost ahead of their crunch Europa League clash against Jablonec.

The Hoops have played well in their last two matches. They will be hoping to build on this and put together a winning run now.

Furuhashi will be pleased with his start to life at the Scottish club and will be keen to continue performing at a high level in the coming months.

Edouard has been linked with a move away from Parkhead, and Postecoglou needs his other attackers to step up and deliver if the Frenchman moves on.

Furugashi’s form for the Scottish outfit has been outstanding, and the fans will be hoping for more of the same from the 26-year-old.

Here is how some of them reacted to his performance.

There is nowhere I'd rather be 🍀💚

Kyogo Furuhashi, what a player 🔥 pic.twitter.com/kaFfWD4nKj

I cannot remember a more exciting debut at Celtic Park than Kyogo Furuhashi.

What an introduction to life at Celtic for @Kyogo_Furuhashi 👏🏼🍀 pic.twitter.com/2RCJKsuwW8

Read: Celtic eyeing up a move for 25-year-old attacker.