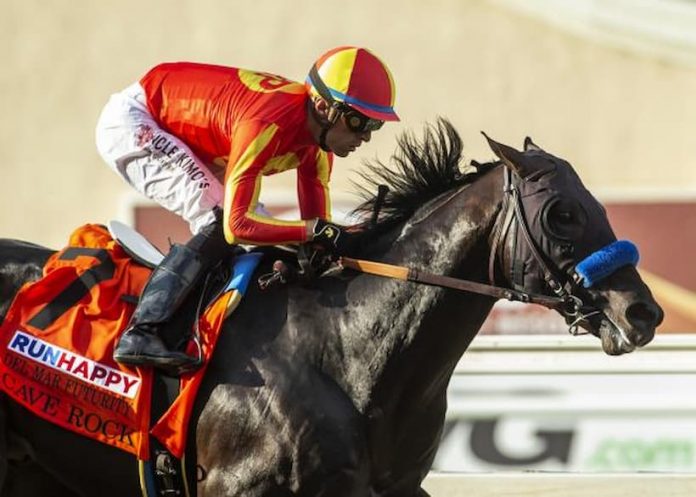 Cave Rock looks to be the next big talking horse to get US racing fans excited after a scintillating win in Sunday’s 2022 Grade One Del Mar Futurity. This son of Arrogate powered home by 5 1/4 lengths and in the process recorded a new stakes time record (1:20.99) – see it for yourself below!

Take your horse racing betting to the next level with BOVADA and receive a 75% CRYPTO welcome bonus (up to $750) to use on the action.

It was a case of Cave Rock first – the rest nowhere, in Sunday’s 2022 Del Mar Futurity.

From the gate, the Bob Baffert-trained son of the late champion Arrogate sat just off his stablemate – Havnameltdown – up with the pace, with the pair always racing well clear of the rest.

But jockey Juan J Hernandez managed to bag the rail turning in the straight and that seemed to help Cave Rock eventually get the better of the tussle, to eventually power away to win by just over 5 lengths at the stick (watch again below).

That Runhappy Del Mar Futurity win made it 2-from-2 for Cave Rock after taking a Maiden Special Weight at the same track on Sept 13 by 6 lengths.

The victory also provided jockey Juan J Hernandez with his first Del Mar Futurity success, but also gave his trainer – Bob Baffert – a remarkable 16th win in the race (see all his winners below).

What Did Cave Rock’s Jockey Say?

“He broke a step slow, but then he got right in gear and made the running,” Hernandez said. “I tried to slow him down some, but he wasn’t having it. So I just let him go on and do his thing. When we hit the quarter pole, I asked him, and he changed leads and took off. He just wanted to go. He’s something.”

Could There Be More To Come Stepped Up In Trip?

Being a son of Arrogate, who sadly died as a 7 year-old, then there could be even more to come from Cave Rock as he gets older and is also potentially upped in trip.

The 2 year-old is still a bit raw and will, of course, learn from his races but is 2-from-2 and doing everything right at this stage of his career.

The Futurity win came over 7f and the way he stayed on over that distance suggests there could be a lot more to come if upped in trip next season. He was doing his best work in the final furlong and his sire Arrogate is a Dubai World Cup and Breeders’ Cup Classic winner over 1m2f, which further indicates his future will sit over further in time.

Cave Rock’s win in the 2022 Del Mar Futurity was also providing his trainer – Bob Baffert – with an incredible 16th success in the Grade One race.

Therefore, it’s no shock that Baffert is the most successful handler in this races history, with the first of those wins coming back in 1996 with Silver Charm, who went onto win the 1997 Kentucky Derby the following season.

After that 1996 win, Baffert went onto win the next six runnings of the Del Mar Futurity – you can see all his winners here.

Pick Up Some FREE BETS To Use On Horse Racing