For a long time, European football fans regarded the Bundesliga as the backwater home of poor defending and psychotic goalkeepers.  It was a league that lived in the shadow of its more illustrious neighbours: Serie A, La Liga, and the Premier League.

However, growing disillusionment with the ‘bigger’ leagues has seen the Bundesliga become the envy of Europe.  Indeed, it now has the lowest ticket prices and highest average attendance of Europe’s five major leagues.  The number of season tickets is capped so that your average fan always has a chance to get to games.  The away team has a fixed right to 10% of available capacity.

Match tickets come with in-built train tickets to travel to stadiums where supporters are welcome to stand, sing, and drink beer.  The clubs make a collective profit, and now, to top it all, Bayern Munich have reached the  last round of the Champions League.  It is eight years since Bayer Leverkusen contested the final, and nine since Bayern won it.  The Bundesliga has waited, but it might now be about to be back on top.

The Resurgence of Bayern 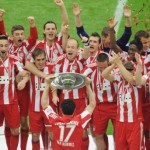 This is undoubtedly Bayern’s season.  On the final weekend of the season a 3-1 win over already-relegated Hertha Berlin saw them ensure the title, and potentially the first part of a historic treble.  It’s a remarkable turnaround for a club who seemed to be heading for disaster back in December.

New coach Louis Van Gaal’s relationship with the players was disintegrating, and he was reportedly just one defeat away from receiving his notice.  Van Gaal was hired after leading AZ to the dutch championship – a formula Wolfsburg will be hoping to repeat next season after hiring Steve McClaren, who must already be practising his comedy German accent.  But despite his experience and tactical know-how, Van Gaal was struggling.  His time was almost up.

Then game the catalyst for change: a 4-1 win over Juventus in Turin that ensured qualification for the knockout stages of the Champions League, and created the positive momentum to carry them forward in the Bundesliga.

Bayern share the widespread unpopularity that Manchester United have in England – such has been the consistency and nigh-predictability of their success that non-Bayern-supporting members of the German public have understandably begun to tire of them.  This season, however, not many will begrudge them their success.  They’ve played with such style that it’s perhaps not surprising to note that their team is built on the same model as the Real Madrid ‘Galacticos’ team: one of ‘Zidanes y Pavones’ – stars and youth players.

Bayern cannot compete financially with the likes of Real, Chelsea or Man City, so are forced to make use of their impressive youth system.  This season, Philipp Lahm, Bastian Schweinsteiger, Holger Badstuber and Thomas Müller have all featured regularly, and are all products of the Bayern academy.

Schweinsteiger’s transformation this season has been a key component of Bayern’s success.  After emerging as a non-axial playmaker – a floating winger with the capacity to cut in and shoot from distance – Schweinsteiger has recently been converted to a holding midfield role.  As he has matured so has his game, and now is able to make use of a budding football brain to pull the strings for Bayern from deep in the centre. 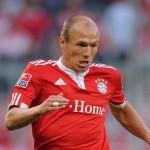 Of course, what accelerated Schweinsteiger’s departure from the wing was the arrival from Real Madrid of Arjen Robben.  It will pain Real to see the Champions League Final take place in their own stadium without the participation – and it will hurt them all the more that a player they let go this summer has been so instrumental in taking Bayern to the brink of that success.

In the Bundesliga too, he has been instrumental.  In the second half of the season he has arrived at his best run of form and fitness since his first season at Chelsea.  Playing predominantly from the right-hand side, his ability to dribble in-field and finish is probably second on the global stage only to Lionel Messi.

Robben’s form has been such that he has surpassed even his much coveted team-mate Franck Ribery, with 16 league goals as opposed to the Frenchman’s four.  Ribery has faced problems on-and-off the field.  He has struggled with tendonitis in his left-knee, which caused him to miss several months before the winter break, and will miss the Champions League final due to a suspension for a straight red-card in the semi-final tie with Lyon.  However, when available, Ribery has joined Robben to a form a twin counter-attacking unit who can demolish any side.

Bayern unite the Dutch 4-3-3 philosophy with a German solidity and stoic character.  After a questionable start, Van Gaal has knitted together a team who have dominated domestically, and could become the first German side to do so on a European scale in almost a decade.

In second place this year are Felix Magath’s Schalke.  Having led Wolfsburg to the title last season, Magath will have to make do with second place this time round.  A collection of Brazilian internationals like Ze Roberto, Rafinha, Mineiro and Bordon have helped Schalke to automatic Champions League qualification, and they can be proud of running a rampant Bayern so close.

The Champions, however, have not shown Schalke much good grace, with President Uli Hoeness labelling them “the vice-champions of the hearts” – an allusion to Schalke’s claim in 2001 that they were “champions of the hearts”, despite finishing second.  Just when Bayern seem to be clawing back some popularity, they are liable to throw it away with an act of haughtiness like that.  One wonders what kind of verbal sparring Hoeness and Jose Mourinho might indulge in as the Champions League Final approaches.

At the end of their final game at Mainz, Schalke’s star strike Kevin Kuranyi threw his kit in to the crowd, and confirmed he will take up his right to a Bosman transfer by moving to Dynamo Moscow.  Kuranyi reportedly turned down offers from Premier League clubs including Sunderland and Tottenham to accept the Russian’s £200k p/week offer.  With Joachim Low confirming that Kuranyi will not be part of his World Cup plans, the Brazilian forward is free to get spending his considerable signing-on fee straight away.

The third Champions League spot goes to Werder Bremen, who recovered from a sixteen-point deficit to overcome to haul back Bayer Leverkusen.  Claudio Pizarro’s return to Geman football has banished the memory of his dire form at Chelsea, and it was his goal in a final day 1-1 draw with Martin Jol’s Hamburg that ensured Bremen’s rollercoaster season ended on a high.  Bremen now have the unenviable task of attempting to stop Bayern completing a domestic double in the German Cup Final.

Hamburg themselves have only another crack at the Europa League to comfort them after the ignominy of their exit against Fulham and losing the chance to contest the final on their own ground.

Sixth place Stuttgart waved goodbye to full-time mentalist and part-time goalkeeper Jens Lehmann, who played his last professional game at Hoffenheim, who failed to build on a promising first Bundesliga season by slumping to 11th place.  Lehmann’s side were the form team of 2010, putting together a decent Champions League run and sneaking in to Europe after suffering just one defeat in the post-Christmas Bundesliga fixtures.  Christian Gross, still a figure of fun in England, deserves serious credit: when he arrived, Stuttgart were 15th.

Last season’s Champions, Wolfsburg, slumped to eighth place this season – twenty points behind eventual winners Bayern.  They were let down by a leaky defence and too many draws, but the attacking due of Edin Dzeko and Brazilian Grafite still offer plenty of promise for the arriving McClaren next season.  Dzeko racked up 22 goals in 34 games, also providing an impressive 7 assists.  At the risk of stumbling in to every ‘big man’ cliche going, his deft touch belies his stature, and the Bundesliga will probably struggle to keep hold of one of Europe’s most exciting attacking talents.

An emotional final day victory for Hannover against Bochum kept the former in the Bundesliga, and in extraordinary scenes the team promptly fell to their knees, burst in to tears, and dedicated the win to Robert Enke, the goalkeeper who tragically took his life in November of this season.  Enthralling though the Bundesliga has been, it is Enke for whom this year will be remembered.  His death sent shockwaves through the sport, and once the initial surge of grief had passed, highlighted the important issue of the disregard for mental health difficulties than exists in many sports.

The whole affair clearly hit Hannover hard, and they almost paid the price with their place in the league.  Instead, however, it was Bochum who went down, after such a poor season that on the last day disenchanted fans ran on to the pitch to try and attack players at the final whistle.  Caretaker manager Dariusz Wosz is not expected to hold on to the position, so it remains to be seen who will be faced with the challenge of re-enlivening this despondent team.  FC Nurnberg, meanwhile will face FA Ausburg, the third best team from the Bundesliga 2, in a two-legged play-off to decide their fate.

As mentioned before, Hertha Berlin have been relegated for the first time in 13 years.  They ended up 7 points adrift from safety, after winning just five games all season.  Their main problem was an inability to score goals – their final tally of 34 was less than half that of Champions Bayern.  Some observers pointed to a form of footballing karma: in 2008-09, Hertha were infamous for producing some of the dullest football on offer in Europe.  What was once regarded as clever, defensive tactics transformed to dull, uninspiring defeats.  Bayern’s success this season shows that adventure can be rewarded.

Their remains one final battle for the Bundesliga to face.  If Bayern can overcome Jose Mourinho’s Inter Milan in the Champions League Final of May 22nd, it will be a victory for German football over Italian in more ways than one.

If Bayern win, Germany will secure third place in UEFA’s all-important UEFA coefficient rankings, simultaneously overtaking Italy, and winning an extra automatic Champions League spot as of 2011/12.  Add that, and the Bundesliga becomes yet more alluring.