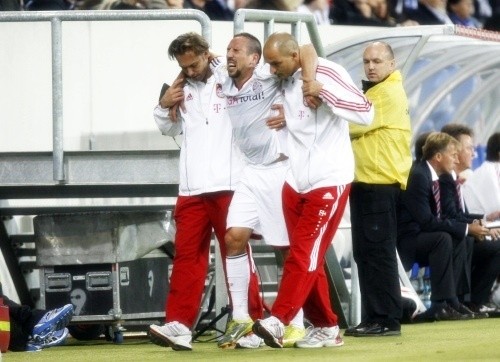 With weekend and midweek games in the Bundesliga, the prospect of being able to earn six points in as many days would have been an appealing one to not only those clubs who have started well but those who have struggled in the opening weeks.

The conclusion after Wednesday night’s results: Mainz, Borussia Dortmund and Wolfsburg will be pleased with earning maximum points. St. Pauli and Bayern Munich will have mixed feelings; Schalke will be relieved and Hoffenheim will be concerned. However, Werder Bremen, Eintracht Frankfurt and Borussia Mönchengladbach will have to do much, much better.

Leaders Mainz have put together a four game winning streak and take a five point lead into this weekend’s games thanks to two goals from Anglo-German midfielder Lewis Holtby (who is actually on loan from Schalke!) in Tuesday night’s game against Köln.

The early success of Thomas Tuchel’s side has come as something of a surprise to some sections of the German media; perhaps no-one had actually noticed that last season Mainz had a better home record than Werder Bremen and only Bayern and Bayer Leverkusen conceded fewer goals at home in 2009/2010. The reason for Mainz’ improvement is their away record – they only won three times on the road last season but have already won twice away from home in 2010/2011.

The dramatic improvement Mainz’ form away from home will be tested this weekend when they visit Bayern. The hosts have won all four meetings in the Bundesliga between the clubs at the Allianz Arena by an average of 2.25 goals but Bayern will be without Franck Ribéry for approximately four weeks after the French international damaged ankle ligaments in the win at Hoffenheim on Tuesday night.

Daniel van Buyten scored a late winner after Hoffenheim had taken the lead; Vedad Ibisevic scored after only 36 seconds. Ribéry’s loss is arguably as important as the continued absence of Arjen Robben who is not expected back until after the winter break. On Thursday Bayern chairman Karl-Heinz Rummenigge issued the Dutch FA with an ultimatum, claiming that Bayern should receive  €1m (£850,000 or $1.3m) in compensation for Robben’s unavailability.

The club with the most to gain if Mainz fail in Bavaria is Borussia Dortmund. Comprehensive victories over Schalke and Kaiserslautern have moved Jürgen Klopp’s outfit into second place and as they’ve won five of their last games at St. Pauli, die Borussen could find themselves top of the table on Sunday evening.

However, Dortmund won’t find St. Pauli pushovers: only a fantastic volleyed equalizer from HSV’s Mladen Petric prevented St. Pauli from taking all three points in the Hamburg derby last weekend and the ‘Buccaneers of the League’ came from a goal behind to beat Borussia Mönchengladbach 2-1 during the week.

At the wrong end of the table Schalke finally won on Wednesday evening: Klaas-Jan Huntelaar scored a late winner against Freiburg and has now found the back of the net in consecutive games. Russian striker Pavel Pobgrebnyak scored a hat trick as Stuttgart set a record with their 7-0 win over Borussia Mönchengladbach – it was The Foals largest ever away defeat in the Bundesliga – but Stuttgart then lost at Nürnberg on Wednesday evening  to remain in the bottom three.

None of the top seven teams are at home this weekend which may mean that the high numbers of away wins in the Bundesliga could continue: 40% of the games so far have seen wins for the visitors, compared with 20% in the Premier League and 35% in La Liga.

However this week’s tip of the week features a game that could buck that trend and stop the mini losing streak I’m on – Wolfsburg and Freiburg failed to come up with three goals between them last week!

Borussia Mönchengladbach – who are getting a lot of mentions for the wrong reasons this week – have not won at Schalke since August 1992 and the hosts have won nine of the last ten games between these two at the Veltins-Arena; despite their awful early season form Schalke’s win over Freiburg will have boosted their confidence.

Mönchengladbach’s 6-3 win at Leverkusen looks like an early season fluke and as they’ve conceded an average of 3.11 goals per game in their last ten away games, my recommendation is to back Schalke at 3/5.