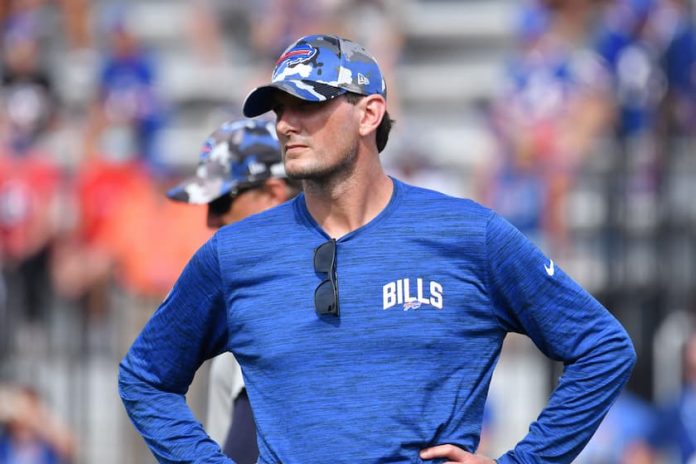 Following the Bills loss to the Miami Dolphins on Sunday a video emerged of Bills coach Ken Dorsey having a meltdown ripping off his headset and slamming it on the desk. Dorsey has now addressed his meltdown whilst speaking to reporters.

The video which emerged is showing Dorsey’s reaction to the Bills not getting lined up quick enough to spike the ball and stop the clock to get off one more play at the end of regulation to try and overturn their two-point deficit.

Bills OC Ken Dorsey was not happy at the end of the game. pic.twitter.com/F7Jp5IMlFP

The mistake by the Bills offense was one of many which may give some insight into the Bills offensive coordinators actions. Earlier in the game quarterback Josh Allen lost a fumble inside his own 10-yard line on their second possession as well as Tyler Bass missing a 38-yard kick attempt in the fourth quarter.

Yesterday speaking to reporters Dorsey explained his actions: “It was an intense game, it was a passionate game, I’m up in the box watching my guys down there give us everything they possibly have in them, with effort from start to finish playing 90-something snaps in the game. Obviously, we weren’t on the winning end of it, so it’s frustrating and I reacted that way.”

“We’re human, and that’s what happens. I don’t ever want to take the passion out of the game.

“And we’re in this to win football games for the Bills, for our fans. But obviously it’s something I’m going to learn from and make sure to correct going forward.”

Bill’s head coach Sean McDermott insists that the matter has been acknowledged internally and he doesn’t want a repeat of his actions: “I think that says a lot about him as a coach and how hard he works at it, and how important it is to him,

“But that said, it’s important that we as leaders keep our poise and we model that to our players.”