Edinson Cavani has reportedly grown frustrated for being regularly used in a wide position, and he is considering his future at PSG due to his role in Blanc’s set-up.

The 28-year-old striker was left out of the starting line-up in PSG’s 1-0 win against Toulouse on Saturday, but he came on as a substitute for Javier Pastore and played in a more orthodox #9 role.

Blanc, however, has stressed that he will not abandon his system to entertain Cavani’s wishes.

“I’m not here to please somebody, I am here to win matches,” he told a media conference.

“At half-time, I changed the system again. They are professional players, they need help of course, but it is the team that is the most important.

“The coach must protect the team. We make choices based on that and not based on each other’s enjoyment.”

Italian newspaper Corriere dello Sport (via Sport Witness) has covered a big story on Cavani on their front page in Tuesday’s edition, speculating on his potential transfer from the Italian clubs’ perspective. 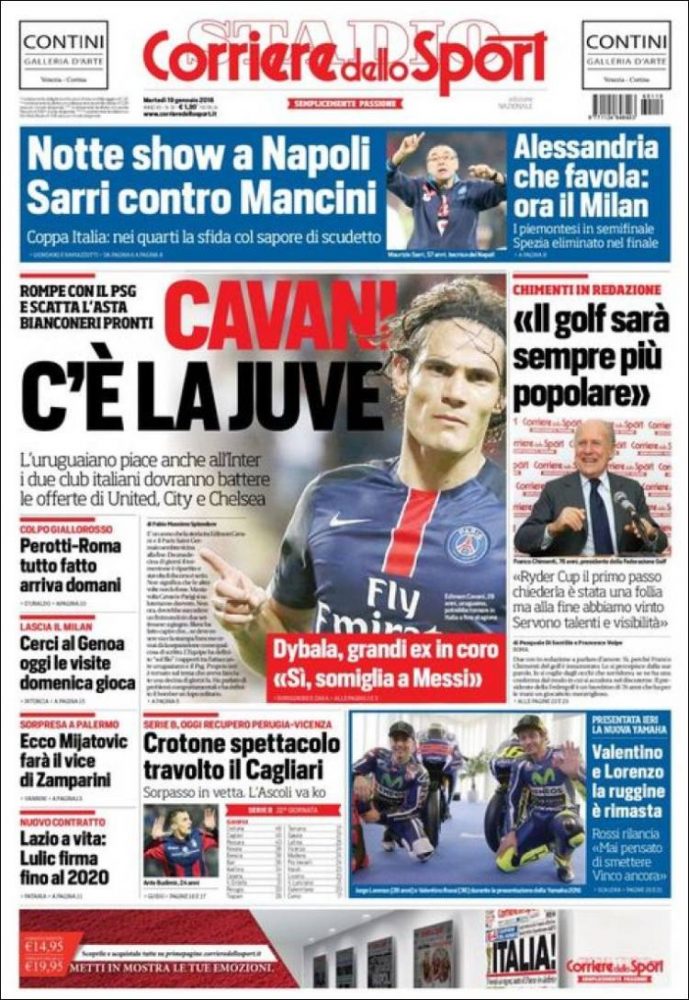 Juventus and Inter Milan are interested in signing Cavani, but they need to first match the offers from heavyweight Premier League clubs – Chelsea, Manchester City and Manchester United.

Cavani has been heavily linked with a move to Manchester United over the past two transfer windows.

The Red Devils had reportedly made an approach to sign him on a few occasions in the past, but every time they returned with a negative response from the French champions.

The situation, however, has changed, and PSG might consider selling him this time around should United come up with a good offer.

The Uruguayan has scored 69 goals for PSG since joining the French club in 2013. He is a top class striker and would improve any team in the world.

On the flip side, he turns 29 next month, and is probably past his peak as a striker. Plus, PSG value him at €40m (price quoted by CDS) which could put off any potential investors going forward.