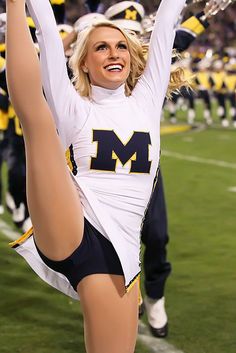 Six weeks are done and dusted in college football, but the action goes on. Week seven is already underway but a majority of the action takes place on Saturday and we are here for it. There is no better way to boost your returns than combining your selections in a parlay and here we offer our best parlay bets for week seven of NCAAF action.


Who would win a real fight between a Nittany Lion and a Wolverine? We’ll be damned if we know, but we do know when they meet on Saturday, the Wolverine and his friends will emerge victorious.

The Michigan defense is an absolute monster and no men (nor mountain lions for that matter) have found a way to breach it consistently this year. Giving up only about 11 points a game, this Michigan D will make sure this Penn State offense struggles to put points up.

Michigan quarterback JJ McCarthy should be able to rack up enough points to seal the win comfortably enough in this one. Penn State is ranked 100th in college football in passing yards allowed per game and there are good matchups for the wide receivers. If that doesn’t work, Michigan can hand the ball off to touchdown scoring machine Blake Corum. Either way, Michigan wins, lock it in.

Sure, Oklahoma just got blown out 49-0 by Texas, but hear us out. Kansas now has something called a Jason Bean starting at quarterback. If you would like to back Mr. Bean to win a football game against likely OU starting QB Dillon Gabriel, be our guest.

Dillon Gabriel missed last week’s game with Texas due to a concussion but he will likely return for this one. And with Kansas missing starting QB Jalon Daniels, who has been sensational this year, it is a definite bounceback spot for the Sooners.

We watched Jason Bean play last year and if he hasn’t improved about 3,000% then this one can already be chalked up to us. Even this Oklahoma D, that was calamitous last week, could get a few easy looks at turnovers.

Dillon Gabriel brings this one home for us. No doubt about it. 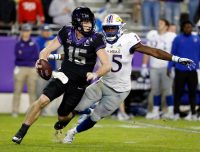 These two defenses are an absolute disaster. Neither of them could stop a fat kid from getting to the fridge.

They both rank in the bottom 15% of teams in the NCAAF against the pass. Add to the fact that both teams have more than serviceable quarterbacks and the recipe is there for a shootout.

TCU QB Max Duggan and OK State QB Spencer Sanders aren’t afraid to sling it. But if that isn’t working, they can both take off with their legs too.

We have looked at this game for a while and cannot figure out where the stops occur. Scoring will happen early and often and this one will sail over. Lock in our third parlay pick.

Yes, we love points. Yes, we love it when North Carolina plays because it means points. Sue us.

UNC might be our favorite team to play overs with. But they have been letting us down over the past couple weeks by playing something called defense. But UNC QB Drake Maye is still throwing touchdowns and putting up points for fun. There’s not a defense in the land that can stop this man and especially not in a rivalry game like this one.

Despite their best efforts over the past few weeks the Carolina D is still ranked 123rd out of 131 in yards allowed per game and 107th in points allowed per game. This improvement will be short lived and normal service will be resumed on Saturday. Another shootout it is or a 52-21 win Tar Heels win. Who cares? It’s going over. Lock it in.

Good luck to us all!