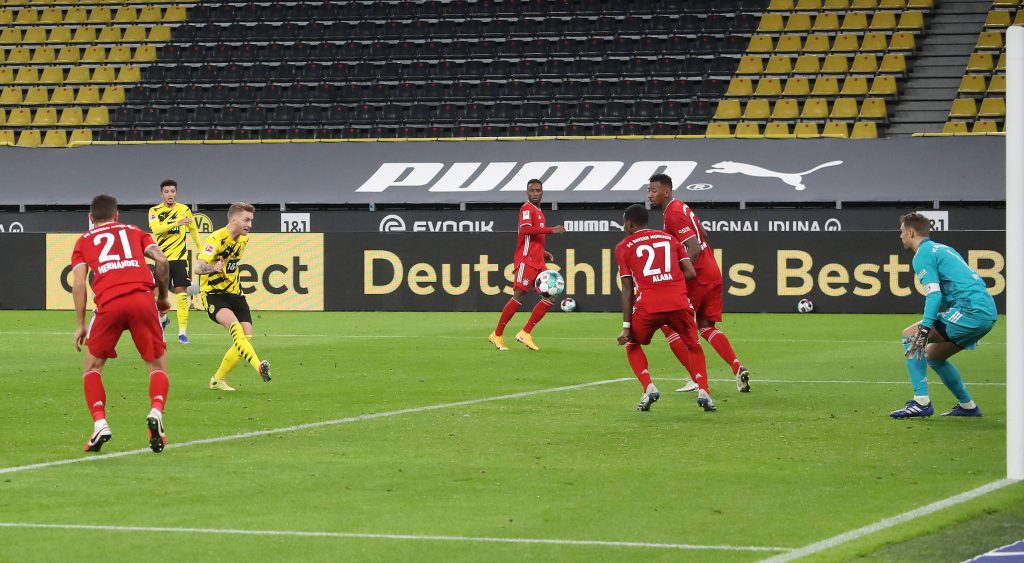 Bayern Munich and Borussia Dortmund are set to face-off at the Allianz Arena in one of the most highly anticipated fixtures on the Bundesliga schedule.

After being betting favourites to win the Bundesliga with Betway sports betting for most of the season, the Bavarians come into this encounter frantically looking over their shoulders as they hold a fragile two-point lead on second-placed RB Leipzig.

Meanwhile, the BVB sit three points behind fourth-placed Eintracht Frankfurt and are in desperate need of points.

Bayern performed a comeback to beat Dortmund 3-2 when the two teams locked horns at Signal Iduna Park in the first half of the season.

Die Klassiker at the Allianz Arena has lately seen one-way traffic, with Hansi Flick’s side winning the last six Bundesliga head-to-head meetings here via an aggregate score of 26-3.

The Bavarians have bagged over 3.5 goals per game in each of their previous five top-flight home matches against the BVB.

Bayern’s tally of 67 goals scored after 23 matchdays this term is the second-highest at this stage of the Bundesliga campaign.

At home, they have netted a staggering 42 goals this Bundesliga season, with 66.67% (28) of them arriving in the second half of play.

Ahead of the kick-off, the visitors have gone from two consecutive Bundesliga games without winning (D1, L1) to back-to-back victories, both of which saw Dortmund score 3+ goals and keep a clean sheet.

Overall, Edin Terzic’s men have racked up four successive wins in all competitions by an aggregate score of 11-2.

On the road, none of Dortmund’s last seven Bundesliga fixtures have ended in a draw (W3, L4), all of which saw the side to open the scoring eventually win the match.

Despite an indifferent away form, the BVB will be confident of finding the net here after scoring in 21 consecutive Bundesliga games.

Dortmund’s road action usually bursts into life in the second half, with 78.26% of their total league goals scored away from home this term coming after half-time (18/23).

Betway have the hosts as favourites for this game but despite the odds, Dortmund are always a good bit to cause an upset in Der Klassiker.