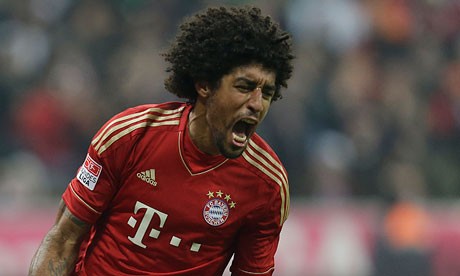 Manchester United’s search for top-quality additions continues as the January transfer window flashes by, with no luck in signing any new faces as yet for David Moyes.

With the likes of Nemanja Vidic and Rio Ferdinand out of contract at Old Trafford this summer, a new central defender is believed to be on the Scottish manager’s wishlist.

The search has seemingly ended up at European champions Bayern Munich, with Brazilian defender Dante admitting that the Manchester club are interested in signing him this month.

“I’m thankful for the Manchester United interest,” The Guardian report the South American as saying.

“It will all be sorted out by the end of the month. We have to wait until 31 January because there is a lot going on.”

However, the 30-year-old’s agent has categorically denied that a move could happen, amid potential contract extension negotiations with the Allianz Arena powerhouses.

“There is no way that is going to happen,” Marcus Marin said. “There is no agreement with Manchester United. He is not going to leave Bayern in the window.

“At the moment Bayern are the only people we have spoken to anyway because we are talking over a new contract. We are still waiting for an answer from them and, although things happen very quickly in football, until that situation changes, we cannot speak to anyone else anyway.

“Dante is at a crucial stage of his career, so he needs to think about one last big contract. He has had a brilliant year and won several medals so we know how important the next few months will be. We are hoping that something can be resolved before the World Cup.”

With the Brazilian waiting to hear about his new contract, is he the type of player that Moyes should be targeting?

Dante is something of a late bloomer, as he only really caught the mass public’s eye in a Borussia Monchengladbach side that also contained Marco Reus in 2010-11 and 2011-12.

Impressive displays in the Bundesliga led to a 2012 move to Bavaria, where he has been in and out of the Bayern side. This season Dante has started 13 of the club’s 16 domestic games, and he also made his international debut last year.

There is no doubt that on his day the Brazil national man has all the attributes to be a top-class defender, and he played a role in Bayern’s record-setting season last term.

The 30-year-old has power, pace and stature, which is backed up by a confidence on the ball. However, similar to countryman David Luiz, he is susceptible to a mistake or two, and can be too adventurous in dangerous areas.

Dante has all the attributes to excel at Old Trafford, but questions have to be asked over his age. At 30, the defender is not a signing for the future, and could well be something of a short-term fix rather than a man that Moyes can build a team around.