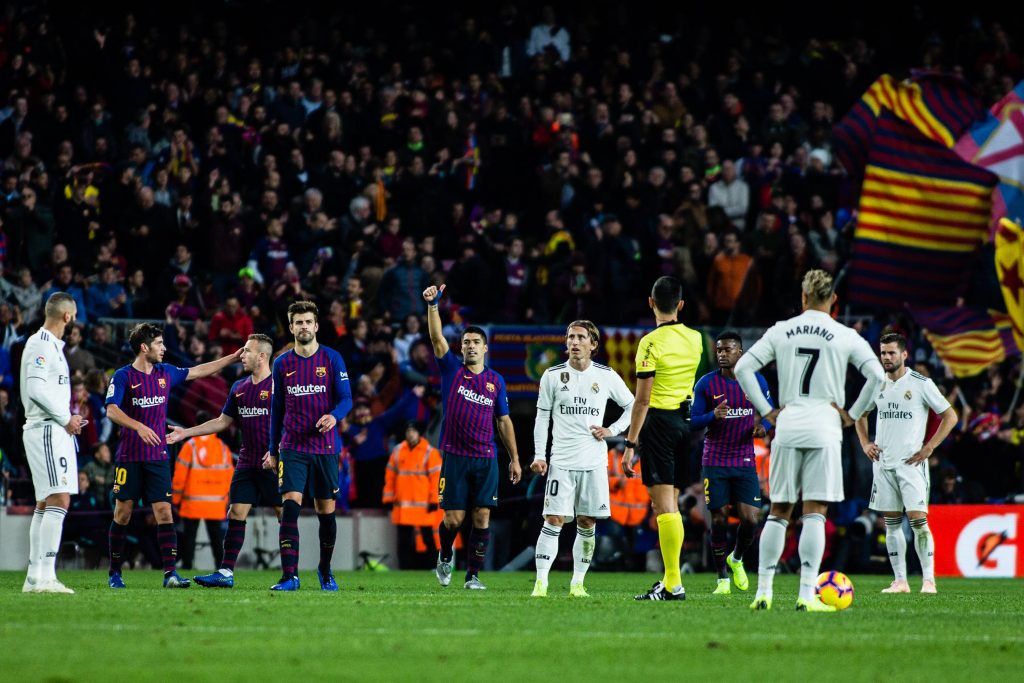 It is no secret that the coronavirus pandemic has resulted in crippling financial implications for clubs across the globe.

The world’s strongest sides have been no exception to this, with La Liga giants Barcelona and Real Madrid amongst those affected.

The fierce rivals have felt the repercussions of the pandemic significantly harder than their European counterparts, who benefit from more elaborate broadcasting rights and stronger financial stability from billionaire owners.

Barcelona are estimated to have surrendered close to €500 million in revenue due to COVID-19, while Madrid’s losses are around €400m.

During the first coronavirus lockdown in March 2020, Los Blancos players agreed to a 10% wage cut to allow non-playing staff to receive their full pay.

The Barca squad agreed to give up to 70% of their wages for as long as La Liga was halted.

The Blaugrana reached an agreement with their players to a wage deferral seven months later, estimated to save the club a further loss of €172m.

Madrid were firmly against the idea of opting for a wage deferral move and instead reached an agreement with their first team for an additional 10% pay cut in December 2020.

The concluding games of the 2020/21 La Liga campaign saw the welcome return of fans to stadiums in a naturally reduced capacity.

However, as football cautiously aims to return to a sense of normality, the financial pressures remain an alarming concern for the hierarchies at Barcelona and Madrid.

Long-term servants from both clubs have had to accept wage cuts as part of recently extended contracts, with the likes of Gerard Pique and Luka Modric accepting deductions in salaries to aid their clubs’ financial recoveries.

How have the players reacted?

Arguably the two most outspoken players have been the club’s captains, Lionel Messi and Sergio Ramos.

The Barcelona icon had become increasingly frustrated at Bartomeu’s persistent public appearances stressing that the first team players will accept reductions in pay to help accommodate for the unprecedented circumstances the pandemic had caused.

Messi, who at the time had donated €1.1m to a hospital in the Catalan capital and another in his homeland, would have naturally agreed to the proposal.

Back in September 2020, after announcing he would be staying at the only club he has ever known as a professional player, Messi was highly critical of Bartomeu in a revealing interview with Goal.

He said: “The management of this club lead by Bartomeu is a disaster. The truth is there is no project at this club. They just plug holes as and when things happen.”

Crisis-hit Madrid are aiming to wipe out a £60m shortfall caused by the pandemic with a mass overhaul this summer.

Manager Zinedine Zidane quit the Galacticos last week and Ramos, whose contract expires at the end of the month, is likely to follow suit after failing to agree terms on a new deal.

The Spanish international’s departure from Madrid is unlikely to occur without fireworks after Jose de la Morena, director and presenter of Radio programme El Transistor, reported that Ramos has called his Los Blancos teammates.

De la Morena revealed that one unnamed player had told the club that Ramos told them not to accept pay cuts because the money saved will only go towards signing Kylian Mbappe.

The sensational reports regarding Ramos’ bold move begs the question, does he have a point?

A valid stance due to the work the players have put in to secure contracts at one of the biggest clubs in the world, the majority of whom have families to take care of?

Or petulance from an individual who has allowed greed and a prima-donna attitude to blur all sense of reality?

There is no doubt that Madrid’s performances over the last few years have been underwhelming, particularly this year’s campaign, with the club finishing the season without any silverware for the first time in over a decade.

Naturally, stronger performances domestically and in the Champions League will help Madrid recoup the substantial financial losses they have suffered during the pandemic.

To ensure this, recruitment is necessary. However, the signings required to return Los Blancos to the summit will not come cheap.

Despite the club’s recent acquisition of David Alaba on a free transfer from Bayern Munich, the versatile defender is set to earn a staggering £412,000-per-week after signing a five-year contract.

Golden boy Mbappe would presumably put pen to paper on an even higher lucrative deal as well as costing Madrid a signing on fee in the region of €120-€150m.

Alaba, as one of the world’s best defenders, will significantly bolster Madrid’s backline and provide assurance to a vulnerable defence that has been exploited far too easily this season.

Mbappe’s signature would elevate Madrid to the heights they are renowned for performing at throughout their history.

Spanish newspaper AS has reported that Messi is on the verge of ending fierce speculation regarding his future by signing a two-year deal with Barcelona.

Despite the 33-year-old’s pending extension, Messi will accept a pay cut in his new contract.

However, he has been assured that the money will be used to invest in signings that can lead the Catalan giants to Champions League glory for the first time since 2015.

It could not be more vital for Los Blancos players to follow in Messi’s footsteps and see past extortionate wealth for the greater good of the club.

Just as a win is secured through a team effort on the pitch, Madrid must come together off the pitch in a bid to secure the highest honours available to the club as a collective.