India
Home News arsenal all or nothing every amazon prime ranked 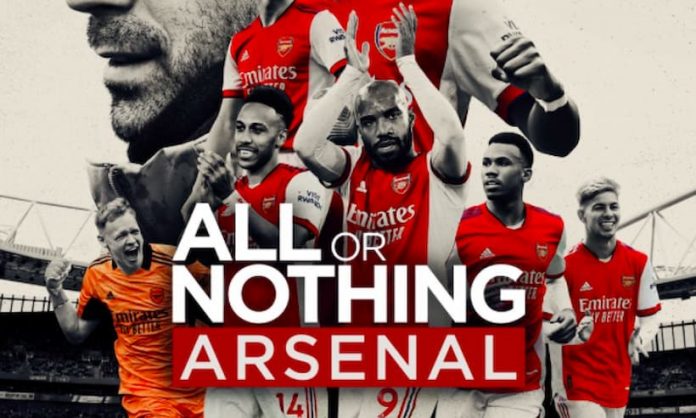 The rise of social media has allowed the modern football fan a greater depth of insight into their favourite players’ live than ever before. When Amazon Prime’s ‘All or Nothing’ series debuted in the Premier League in 2018, cameras followed Pep Guardiola’s ‘Mentality Monsters’ Manchester City, giving supporters undiluted ‘behind the scenes’ access.

From there the series went on to cover Brazil’s winning campaign at the 2019 Copa América, Jose Mourinho’s tumultuous 2020 season in charge of Tottenham, as well as Andrea Pirlo’s attempt to win Juventus’ 10th consecutive Serie A title. Arsenal are the next team to bare all to the cameras with their ‘All or Nothing’ trailer releasing on June 28th.

Ahead of the new series, which should feature plenty of controversial moments at the Emirates and Gunners training ground, we have ranked the shows from worst to best.

4. All or Nothing: Manchester City

Let’s be honest, for anyone who isn’t a Manchester City fan this is not exactly a joy to watch. Following the fortunes of a team funded by a billionaire Sheikh who steam-roller all teams in their path doesn’t exactly conjure up sense of the magic that Leicester’s miraculous Premier League victory enduringly created back in 2016.

The narrator, Sir Ben Kingsley, promises “a never before seen look inside the world of professional football” in All or Nothing. But frustratingly the series fails to live up to the expectations. It pulls its punches, fails to probe Manchester City in depth and ends up being nothing but a gloriously glossy club commercial.

Nonetheless there are occasional moments that tug on the heart strings, such as Pep Guardiola telling his players they have to win for their midfield maestro David Silva and his girlfriend, who has just given birth to a dangerously premature baby. But overall this is the least entertaining of the series and probably not worth your time – unless you support the club in question that is.

3. All or Nothing: Juventus

Over eight episodes, this series charts Andrea Pirlo’s first year at the helm of Serie A giants. He takes over the most successful club in Italy – one that has won the Scudetto for nine consecutive seasons and whose ambition is to win their first Champions League trophy since 1996. Viewers are given a chance to see the professionalism with which Cristiano Ronaldo applies himself at work.

The interesting factor of this series is the chasm in mentality between the veterans at the club such as goalkeeping legend Gianluigi Buffon and the youngsters such as Adrien Rabiot. In episode seven, Pirlo and Buffon talk about how the world has changed since they were young. “Now the priority is the phone, the followers, being silly on Facebook, on Instagram,” says Buffon. Pirlo bemoans this too. “One thing that I hate is seeing people on their phone right before the match. From next year, you get your massage and you leave your phone in the locker,” he says.

Despite winning two trophies, the 2020–21 Coppa Italia and the 2020 Supercoppa Italiana, Pirlo failed to lead the club to the tenth Serie A title in a row and was knocked out in the round of 16 of the Champions League by Porto.

2. All or Nothing: Tottenham Hotspur

At the opening of this series Spurs are lurching from one crisis to another in somewhat typical fashion. A dismal 1-1 draw with Sheffield United is enough for chairman Daniel Levy to pull the trigger on Mauricio Pochettino, just months after he guided the club to the Champions League final. Tom Hardy’s surprisingly comprehensible narration tells us that Spurs had never recovered from their defeat to Liverpool in Madrid.

So in comes the ‘Special One’ – although by now the jury is out on whether Jose Mourinho really has anything special about him. His belief is that Spurs are too nice and his masterplan is to turn them into a “bunch of c*nts”. It seems to backfire however as one of the team’s nicest guys, Son Heung-min, sees red for kicking Antonio Rüdiger in a 2-0 home defeat to Chelsea. Tottenham’s all encompassing hatred for rivals Arsenal seems to be the underlying motivation for the likes of Harry Kane and co. in their battle for Champion League places.

The goings-on at the club were captured by 25 remotely-operated fixed rig cameras and 66 ambient microphones installed at the Stadium and the club’s training centre in Enfield. The series also sheds light on the Premier League’s battle through to Covid pandemic which proves insightful but overall, once again, this feels sanitised and failure to really explore the hidden side of a football club.

1. All or Nothing: Brazil National Team

This series offered a slight detour from the previous editions of All or Nothing, as the show delves into the international game with a 5-part documentary that follows the Brazilian National Team through the Copa America on home turf. The likes of Neymar and Gabriel Jesus prepare for the tournament aiming to unite and re-engage a fanbase whose faith had dwindled following recent failures.

Across various episodes, we are given a deep dive into some players hometowns, backgrounds, and their route to where they are today. Hearing from Artur’s father to Gabriel Jesus’ mother, provides an insight to the players upbringing and how they came to be we where they are today. The semi-final clash with traditional rivals Argentina is possibly the most entertaining part of the series, as the pressure begins to takes its toll on players and staff.

Manager Tite seemed reluctant to open up in front of the cameras in the way that Guardiola did in the City series, but his narration of the group stage match against Bolivia was particularly insightful and entertaining. Hearing the manager speak in detail about the decisions he made to influence an important game was eye-opening and overall the series is more enjoyable because club rivalries can be left at the door.

NEW: All or Nothing – Arsenal

In what may be a tough re-watch for Arsenal fans, the latest instalment of All or Nothing captured the best moments from last season, in which Mikel Arteta’s side failed to secure a top four finish on a dramatic final day of the Premier League campaign, with the first trailer set to drop on Tuesday, June 28 at 4pm.

Arsenal’s ‘All or Nothing’ series will be released in August, 2022, although a specific date has not yet been revealed. Gunners fan and Oscar-winning actor Daniel Kaluuya, of Get Out, Black Panther and Judas and the Black Messiah, is set to narrate the documentary.