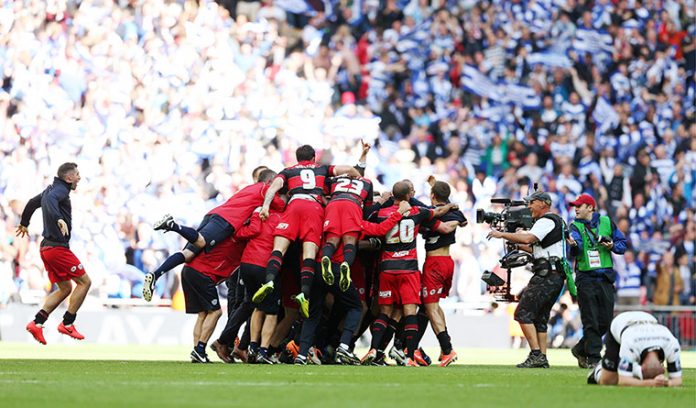 Queens Park Rangers were one of the highest paid sides ever to be relegated from the Premier League when they went down a year ago, but they have managed to bounce straight back, thanks to an amazing twist of events at Wembley today.

Coming up on an hour played, Derby were looking the stronger of the two sides and had also gone into the game as favorites having finished the season 5 points ahead of Rangers, in 3rd place.

Then Queens Park suddenly came alive and began to apply some solid pressure, Bobby Zamora’s arrival on the pitch for Kevin Doyle sparking the R’s into action. But just 3 minutes after their hopes began to raise, Gary O’Neill brings down Johnny Russell just outside the box and is shown red and sent for an early bath.

QPR hearts drop as they go down to 10 men. Harry Redknapp is left with a difficult decision of who to take off to bolster up defensively having only just brought on Zamora and with Charlie Austin looking sharp. Be it a smart decision or just luck, Redknapp left Zamora on the pitch in the hopes he could poach a goal out of nothing. Something Zamora has always been capable of.

Derby dominated for the last 30 minutes of the game until, with just 20 seconds of regular time left to play, QPR launch an attack and win a throw-in deep into Derby’s half. Straight from the throw, Hoilett pushes into the box and shows incredible grit and determination to get a cross in, angled back behind the six yard box. Up pops Bobby Zamora to put the ball in the back of the net and for the second time scores the goal that takes a team into the Premier League via the Playoffs, having done so for West Ham back in 2005 too.

So we welcome back QPR to the Premier League and they will be really hoping to have a lot less of the disarray of their last campaign where players who had worked so hard to bring them up were made to feel undervalued by players brought in with huge salaries but not putting in performances that justified them. ‘Arry will be aiming to ensure that dressing room is much more unified next season.