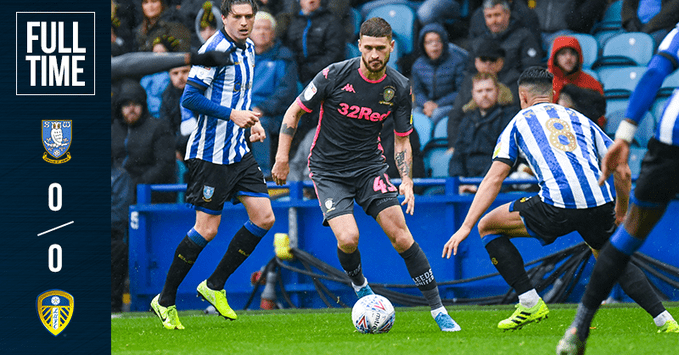 Leeds United missed the chance to go top of the Championship table after they drew against Sheffield Wednesday at Hillsborough on Saturday.

The Whites drew 0-0 against Wednesday at Hillsborough, where both the teams missed some good chances to score.

Kiko Casilla made several fine saves for the visitors as Leeds failed to find a winner under atrocious conditions.

He felt that Leeds lost the physical side of the game once Marcelo Bielsa took off Patrick Bamford. Couzens was impressed with Wednesday and said both the teams could have won and lost at the same time.

Tough game today impressed with Wednesday both could of won it both could of also lost it. we lost a bit of the physical side when bamford went off and the hold up play. 3rd in the Leauge played most of the top 10 as well. It’sa long old season bring on the next 2 home games.

Fair result in the end

Both the Yorkshire clubs are aiming for promotion to the Premier League, and they cancelled out each other. It was a fair result in the end, and both the managers will be happy with a point gained.

Leeds enjoyed 57% of the possession, took nine shots of which three were on target, and earned four corners, according to BBC Sport.

The Whites find themselves third in the Championship table behind Preston on goal difference after 14 games. The Yorkshire club will face QPR in their next Championship game.