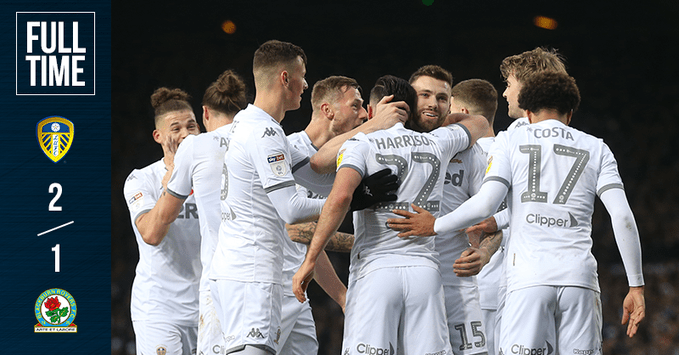 Leeds United won back-to-back games for the first time since August after beating Blackburn Rovers in the Championship clash on Saturday.

The Whites remain third in the Championship table after earning a hard-fought 2-1 win against Rovers at Elland Road. Both West Brom and Preston won their respective matches, but Swansea City dropped points against Sheffield Wednesday.

Leeds United owner Andrea Radrizzani took to social networking site Twitter to express his reaction after the game. He posted a picture of Leeds players celebrating with clap emojis.

Patrick Bamford finally ended his goal drought to give Leeds the lead in the 30th minute when he scored from the spot. Tosin Adarabioyo had fouled Luke Ayling in the area, and Bamford slotted home to score his first goal since August.

Jack Harrison, who has been enjoying a rich vein of form, scored five minutes later to give the home side a healthy 2-0 lead.

Derrick Williams crashed in a header from Stewart Downing’s corner as Blackburn pulled one back before the break.

Tyler Roberts came close to scoring as Leeds dominated the second half. The Whites enjoyed 66% of possession and attempted 15 shots of which they managed to keep four on target, according to BBC Sport.