Football fans have been hooked on the new Amazon All or Nothing documentary showing behind the scenes of Arsenals 21/22 season. In the latest episodes released it shows Aubameyang’s dramatic exit from the club.

Aubameyang has stole the show in newly released episode’s of the documentary, as he was stripped from the captaincy and banned from playing and training with the first-team players.

It was revealed that the forward has the armband taken away from him due to disciplinary issues with him being late to training after being with his ill mother abroad. Subsequently, Aubameyang and Arsenal mutually agreed to let him leave the club and in February he joined Barcelona. 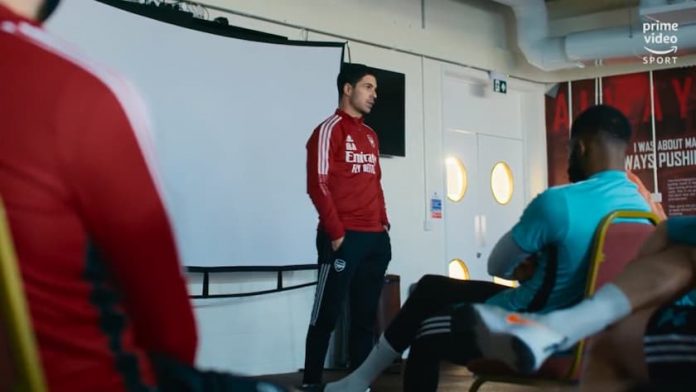 To fans delight Amazon have finally released the footage where Arteta informs the players of the clubs decision.

“Okay I have to announce you something,” the Gunners boss says to his squad during a team talk. “Following the last disciplinary issue that we have with Auba (Aubameyang) and the consequences that I decided to take by not involving him in the game.

“I thought carefully myself and the club about the next step, and we have decided as a club that he’s no longer our captain.

“You should know that. The other decision is that for now, he’s not involved in the squad.”

The footage sadly cuts short and viewers are unable to see the reaction from players and staff to the decision.

The moment Mikel Arteta told the @Arsenal team he was stripping Pierre-Emerick Aubameyang of the captaincy, and dropping him from the squad…

Episodes 4-6 of #AONArsenal are coming to Prime Video on Thursday 11 August 🎬 pic.twitter.com/Egh5bYR1xC

It has been since revealed that Arteta had kept track of Aubameyang’s failure to be on time which led to Arsenals director of football operations calling it “a catalogue of misdemeanors”.

Arteta explained his decision to communications director Mark Gonnella “That’s why I have everything documented with the dates, the times, when it happened, how it happened .

“He has been late, apart from all the issues, many times. The club has got a tradition. When you get paid that much…”

Since joining Barcelona Aubameyang has thrived scoring 11 in 17 La Liga games. However it looks like the forward may be on his way to Stamford Bridge with Fabrizio Romano reporting that Tuchel is pushing the board to sign the player. Chelsea are 4/9 to sign Aubameyang on the best UK football betting sites.