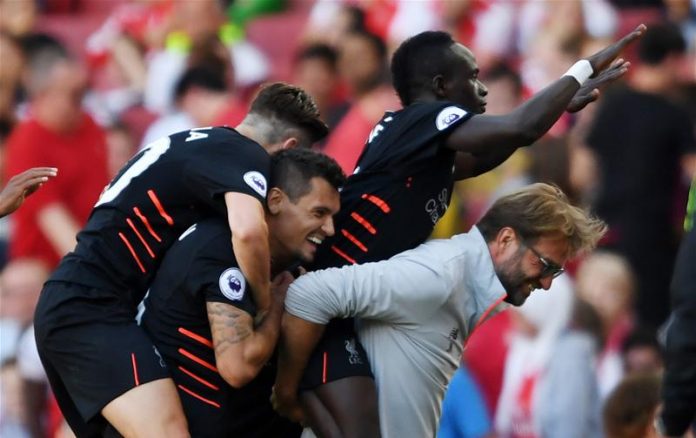 Arsenal and Liverpool engaged in a seven goal thriller where Philippe Coutinho’s brace saw Liverpool come out 4-3 winners in their opening game of the season against Arsenal at the Emirates Stadium.

The result gave Liverpool its first win at the Emirates Stadium since 2011.

Arsenal dominated the early parts of the game, but Jurgen Klopp’s Liverpool went on a goalfest when the second-half began and despite a spirited attempt of a comeback by Wenger’s men, the Reds went back home with all 3 points.

Here are seven talking points from the game.

Liverpool will score plenty but defence remains an underlying issue

Liverpool started the new season with a performance worthy of cherishing, but only in the attacking department. With 4 stunning goals, the Reds proved they have a lot to offer in the offensive department. Roberto Firmino created plenty, Philippe Coutinho ran the show and Sadio Mané proved why Liverpool signed him for 30m in the summer with a stunning debut goal and performance.

Mane’s goal yesterday: the best ever by an #LFC player on debut?

Could be best debut performance by a Red, too.

However,  their defensive performance was weak and was it not for the attack, Liverpool could have suffered an embarrassing defeat on the opening day. Alberto Moreno was big problem on the night, and even though most of the blame has been pinned on him, the defending was equally bad on the right side when Oxlade-Chamberlain was allowed to dance through and fire home. Set-pieces seemingly remain an issue again as Chambers scored from a great Santi Cazorla free-kick. However, Ragnar Klavan looked solid for most of the night and will be happy with his debut. He seems to be a very shrewd investment by the Reds.

Scoring four goals and that improvement in front of goal is certainly encouraging, but defensive issues are certainly still present and must be fixed as they can prove to be a hindrance in the Reds enjoying a good campaign

With six signings, Klopp has certainly strengthened the squad but the Liverpool fans are unanimous in thinking their biggest issue is yet to be addressed. Once again, Alberto Moreno proved to be a liability. He gave away a stupid penalty as he brought down Theo Walcott in the box early in the game. He would be relieved that Simon Mignolet saved the spot kick and Walcott was not allowed to punish him just then.

However, Moreno’s joy was short-lived as his keeper got him out of trouble only for two minutes. Moreno was noticeable by his absence as Walcott slotted the opener past Mignolet.

Alberto Moreno’s first half by numbers vs. Arsenal:

His all-round poor performance caused self-inflicted problems down Liverpool’s left-side. Many have said that Moreno doesn’t get enough help on that flank with Coutinho being largely attack-centric. While that is certainly true, better awareness and performances are expected from a player whose primary responsibility is that of defence.

Liverpool have been linked with a number of left backs but have missed out on all their primary targets. Klopp needs to identify someone new and get him to Anfield because Liverpool cannot go into this season with Moreno as their only left back.

Mignolet is up for the challenge

The signing of Loris Karius meant Simon Mignolet was going into this season as the club’s second choice goalkeeper. A pre-season injury to the German however, paved the way for Mignolet to get a chance to show Klopp why he deserves to be in competition for a starting spot.

Conceding three goals certainly makes his case harder but saving the penalty early on in the first-half shows the player has something to prove. This was his fifth penalty save as a Liverpool keeper. He’s now saved five of the 11 penalties he has faced.

? No @premierleague goalkeeper has saved more penalties than @SMignolet since 2012/13 ? pic.twitter.com/HRkL3xxIoe

While many feel Karius will be reinstated immediately after he returns, it can’t surely be taken for granted. Should Mignolet perform well in the coming games, particularly since Liverpool have a tough set of opening fixtures, there’s a good chance Klopp will want to keep him and not change a winning mantra.

All goals in the game were avoidable

Talking about the game in general, there is little doubt that in a high-scoring game like this one, all the goals scored were avoidable by some good defending from both sides. Bar the stunning free-kick Coutinho scored, some resolute defending at the back could have made the game a lot tighter than it was.

Both teams can blame injuries and lack of match fitness for primary players, but players are still required to put in a better shift at the back which wasn’t the case on the night.

Teams can often rely on their attackers to bail them out, and for Liverpool it did work yesterday — like it did for large parts of the 2013/14 season — but when that doesn’t happen, the defence needs to be much more tight and both teams and their players have to work in that endeavour.

Concede 4 at home, it’s almost as if we need a defence. We didn’t prepare well enough for the 1st game, this is 100% the result of that.

Of the defenders in Arsenal’s squad, Per Mertesacker and Gabriel Paulista are injured and six and three months away, from returning to first team action. Laurent Koscielny needs more time to regain match fitness after returning late from his duties with the national France team. Wenger fielded a makeshift centre-back pairing of Rob Holding and Calum Chambers and there is little doubt another centre-back must absolutely be added before the transfer window shuts.

Arsenal have been linked with Valencia’s Shkodran Mustafa for some time and this game proved why signing him is a dire need.

Alexis Sanchez is not a striker

For all the criticism Olivier Giroud gets, it was proved against Liverpool why Alexis Sanchez cannot be a back-up false nine for the side and lead the attack centrally. Putting him in that position made Sanchez less threatening overall and didn’t cause Liverpool the trouble Wenger might have thought it would have.

He was linking up play as well as creating chances but it was a mixed bag, as in the first half, he only took 18 touches and you don’t want your best player to have that few touches. And when Liverpool began dominating and scoring, Sanchez was not able to orchestrate the play and get Arsenal back in the game. Instead, he was wasted up-front relying on teammates to supply him with chances. There wasn’t enough quality around Alexis, especially with Özil missing, for him to be basically wasted up front.

Walcott determined to stay with Arsenal

This was one of Theo Walcott’s best performances in an Arsenal shirt for some time, bar the penalty miss early on for which he quickly made up with a great goal. He played much more directly, defended well and took his chance really well. Even though he did fade towards the end, he showed promise and signs of improvement that has been missing for sometime.

Walcott’s now scored in 10 different #PL seasons for @Arsenal – only Bergkamp (11) has scored in more for the club pic.twitter.com/nrhQLLcGnc

Walcott has been linked with a move away from the Emirates but after the performance against Liverpool, it showed he was determined to make a case to stay. If Arsene Wenger can once again tap into that unfulfilled potential, Walcott might prove to be Arsenal’s wildcard this season.