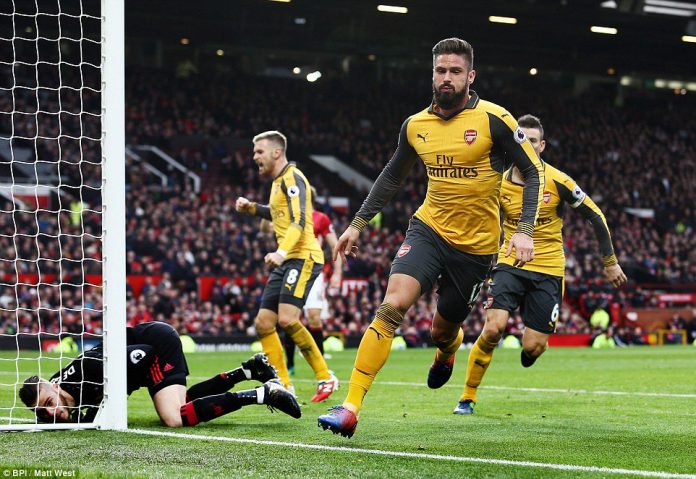 Olivier Giroud scored in the 89th minute as Arsenal came from behind to secure a 1-1 draw against Manchester United at Old Trafford in match day 12 of the 2016-17 season.

Here are seven observations from the match:

For a side that boasts of playing adventurous football, their first and only shot on target was their 89th minute goal. When they should have pressed and made life miserable for the likes of Marcos Rojo and Phil Jones, they were toothless and looked nervous throughout the game.

They clearly had noticed that United were not creating enough clear-cut chances. Yet after the break, they looked more cowed down and less dynamic. Instead of putting up a strong fight after getting behind, Arsenal somehow seemed to have accepted their fate as inevitable.

The hallmark of a great team is the ability to grind out results when things “don’t go your way”. In that respect, Arsenal’s late equalizer may give the impression that they have the character of potential champions. They are the only side in the Premier League who are yet to be defeated away from home, suggesting their overall quality and depth in the squad. And yet one cannot help but think – do they look like potential champions? Hell, no.

“We all know inside, internally, that in this moment, […] we are the unlucky team in the Premier League,” said Mourinho after the match.

Overall, United were the better side of the two…barely. The defence looked tight, mainly because they were not put under pressure. The midfield trio controlled the game, but were far from being dominant. Their attacking players looked sharp, however, the creativity was missing. United probably deserve this victory. Not because they were brilliant in every area of the pitch, but because they were marginally better than a poor Arsenal side.

When Antonio Valencia was hurled down in the box by Nacho Monreal, it looked like a nailed-on penalty. After watching several replays, it became less certain as both the players used their arms and only one fell down.

I wrote an article recently that Marcus Rashford’s talent is being wasted playing wide. In the absence of Zlatan Ibrahimović, the young Englishman led the line for United but could hardly make an impact. It is no surprise that his finest moment in the match was a delightful cross from the right to Paul Pogba, who was marginally offside and couldn’t connect the ball.

Ander Herrera is gradually developing into a top-class player at United. With bundles of energy, he is key to United’s pressing and tactical set up. Against Arsenal, he made an intelligent run in the box and set up Juan Mata with a telepathic link-up play.

And once again, Mata proved why he is a valuable asset for any side in the world. Yes, he has flaws in his game, but always delivers when his side needs him.

This season, Alexis Sánchez has played mostly as a lone striker. A similar tactic is used by Jurgen Klopp, who starts with Roberto Firmino as a #9 at Liverpool. The problem with Sanchez is he tends to drop too deep at times in order to control the midfield, while other Arsenal players hardly complement him going forward.

This is exactly what happened on Saturday. The more frustrated he became on not getting services, the more he dropped deep in search of the ball.

The problem with Olivier Giroud

10 – Olivier Giroud has scored more Premier League goals as a substitute for Arsenal than any other player (10). Impact.

Olivier Giroud gives an extra dimension to the attack when he comes on as a substitute. He is a brilliant superb-sub to have for any side. At the same time, he largely frustrates everyone when he starts.

He is not fast, he is not agile, and his restricted movement means the Frenchman is reliant on quality services, rather than creating chances on his own. Sadly, for him, the more he scores as a sub, the more likely it is to keep him on the bench.