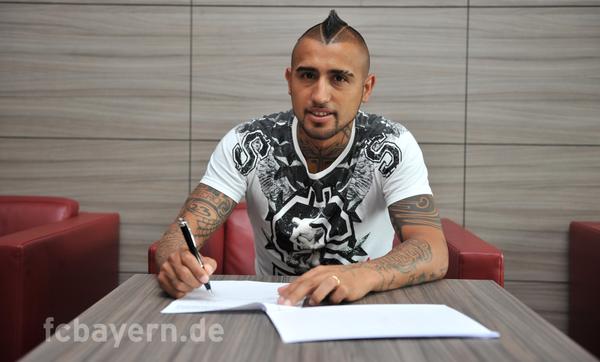 Chile star Arturo Vidal has revealed he rejected a chance to join Manchester United last summer. The midfielder left Juventus and made a switch to Bayern Munich for a reported fee of £26m, as quoted by BBC.

The 28-year-old was heavily linked with a move to Old Trafford in the summer of 2014. However, the deal did not take shape and he continued with the Turin club, before leaving them to join the Bundesliga champions last summer.

Pep Guardiola is managing Bayern and Vidal admitted that a chance to play under the former Barcelona manager convinced him to return to Germany, where he spent four years with Bayer Leverkusen between 2007 and 2011.

“Yes, there was a chance to come to England. It was last summer, and at one point, we thought that is what would happen,” Vidal told The Times.

“I liked the opportunity that they had offered me, but eventually it did not happen and I chose to come to Bayern. There are always many teams around that go to my agent.”

“I wanted to come to a team this strong and to a project that is so ambitious. I feel very happy. It helped that I knew what the country was like and what the people were like. We are better, me and my wife and my children. Life is good, very calm. We are starting to feel more comfortable.”

Vidal replaced Bastian Schweinsteiger at the Allianz Arena as the latter left Bayern and moved to United. The Chilean international has been a regular inclusion in the German outfit’s starting lineup this term.

Guardiola was one of the key factors for the former Juventus star’s decision to move to Bayern. However, the Spanish manager is leaving his current employers after his contract expires following the end of the season and will join Manchester City later in the summer.