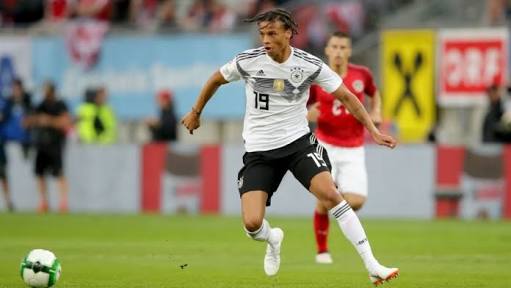 The  2018 World Cup finals start in Russia next week, with the managers of competing nations finalising their plans at training and international friendlies ahead of the tournament.

Today’s news brings the shock exclusion of a superstar forward by Germany, an England youngster that is seemingly set to start for the Three Lions and a defeat for Serbia.

Pickford gets number one jersey

With long-serving talisman Joe Hart out of the equation, all eyes have been on who will start in goal for England this summer.

Everton’s Jordan Pickford has been getting the nod in pre-competition friendlies and it now appears that the stopper will be in goal when the Three Lions take to the pitch for their first game against Tunisia on June 18.

The former Sunderland man has officially been given the number one jersey as the England squad numbers have been revealed.

Gareth Southgate is keen to play out from the back, keep the ball and look to be expansive – as such, Pickford’s ability in possession looks to have granted him the starting berth ahead of Jack Butland.

Leroy Sane not needed by Germany

Germany shortened their World Cup squad to 23 men on Monday and the main absentee was Manchester City winger Leroy Sane.

The flying wideman had an exhilarating 2017-18 campaign for the English champions, terrorising Premier League defences from the left wing.

The City man’s omission sparked bewilderment on social media after the announcement, with Kyle Walker and Michael Ballack both taking to Twitter to express their surprise.

Serbia lose to an experimental Chile side

Serbia will be entering the World Cup quietly confident of progressing through Group E but their preparation suffered a setback on Monday night.

The Balkan nation were beaten 1-0 by Chile in Graz, with the South Americans fielding a side without their main stars of Alexis Sanchez and Arturo Vidal.

Serbia started the game without key men Sergey Milinkovic-Savic and Nemanja Matic, who were both introduced from the bench but could not prevent their side from losing.

While Brazil are widely expected to top Group E, Serbia’s latest result will build confidence among the ranks of Switzerland and Costa Rica.

Ten days to go – sign up for the Sportslens Predictor competition now to make your picks ahead of the competition starting.