Two teams who were away from home midweek in the UEFA Champions League meet at Anfield to kickoff matchday 11 on Saturday lunchtime.

This is often an interesting match and the visitors come into this match as favourites as Premier League leaders.

Liverpool have had issues in scoring and are hindered once again by the absence of Daniel Sturridge who Brendan Rodgers has confirmed will miss this weekend’s match.

Brendan Rodgers rested a number of first-team players midweek so Liverpool should be the fresher of the two teams, also having played their Champions League clash 24 hours earlier and closer to home.

Fabio Borini was quiet midweek and Mario Balotelli has failed to score in his eight Premier League games for Liverpool. In fact, the injured Sturridge is the only striker to have scored for the Reds in the league this season.

José Enrique and Mamadou Sakho may miss another week of action whilst Jon Flanagan is a long-term injury. The Liverpool defence has not looked so pretty this season.

José Mourinho’s side have been blessed by a lack of injuries this season. Loïc Rémy is still sidelined by the summer signing from Queens Park Rangers who failed to pass a medical at Liverpool has been their third choice for much of this season.

Jon Obi Mikel is also out through injury. The Nigerian is a popular choice with Mikel to bring on late on when his side are defending a one-goal lead. Left-back César Azpilicueta is back from suspension.

Eden Hazard is a player much in form and probably won’t have lost much confidence in missing a late penalty in Slovenia midweek. 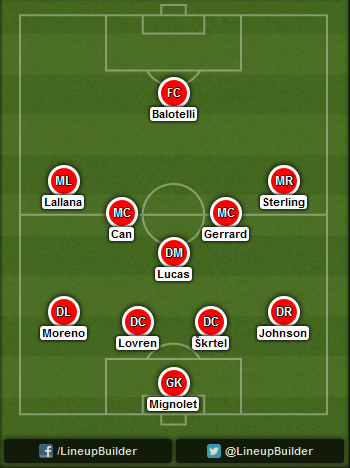 Liverpool stuffed the midweek in Madrid midweek and only allowed one goal. The downside of that was a lack of goalscoring opportunities. Brendan Rodgers’ decision to rest players midweek suggests he should be aiming or at least confident his side can pick up three points in this one. Still, we think they will go with a similar formation to that used at the Santiago Bernabéu; built to avoid defeat rather than go for victory. Alberto Moreno offers good pace from left-back and could cause Branislav Ivanović a few problems. Emre Can offers energy in midfield and Raheem Sterling should be an attacking threat despite being relatively quiet in the past couple of games. 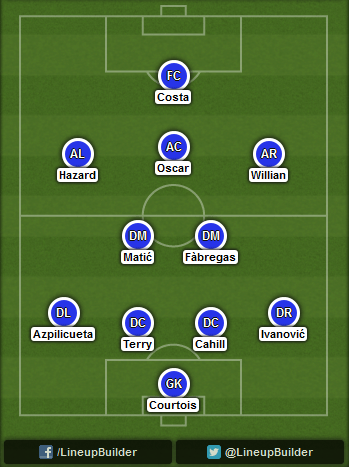 Chelsea may be a little cautious in this game against last season’s runners-up with only two days rest following a three-hour flight from Slovenia. It’s been a shaky period for the league leaders of late – drawing at Manchester United, leaving it late to beat Queens Park Rangers and drawing with Maribor. Diego Costa was poor in his finishing on Wednesday whilst Cesc Fàbregas had a sloppy game.

Eden Hazard vs Glen Johnson
Javier Manquillo played left-back midweek and did a fine job on Isco. However, we think former José Mourinho signing Glen Johnson will be back in the starting lineup for this one. It’s not a good matchup for Liverpool with the England international not the best defensively. Eden Hazard has been in superb form this season and is capable of dominating any game as he has done in a few this season. Creating chances from down the left and cutting inside should really cause problems against a Liverpool defence that hasn’t looked very solid at all this season.

Diego Costa vs Martin Škrtel
Chelsea’s first choice striker made his return against Queens Park Rangers last weekend and has failed to score in his one-and-a-half games over the past week. The Premier League’s second top scorer is always a threat though but has been relying on his teammates creating them for him. Not very good at creating them himself or from long distance, Diego Costa is good at finding space and should have success against the Liverpool back four.

Willian vs Alberto Moreno
If Liverpool stuff the centre of midfield they could keep Cesc Fàbregas and Oscar quiet. Therefore Chelsea may look to the wings. Willian has played decent this season without being too heavily involved in the goals. Supported by Branislav Ivanović who likes to attack from right-back could Alberto Moreno double teamed. Adam Lallana offers support in defence from the left wing at least.

Prediction: Liverpool 1-1 Chelsea
Liverpool have had a massive advantage with the extra 24-hour rest from midweek. Brendan Rodgers also used less of his first team players meaning they have a clear advantage in fitness. The Reds often raise their game against the West London side. Chelsea not been over-convincing lately and may have to settle for a draw in this one.