Last season the English side did the double over their German counterparts; 3-0 both home and away. Both sides went on to progress to the knockout stage – Chelsea eliminated in the semi-finals by Atlético Madrid and Schalke dumped out unceremoniously in the second round at the hands of Real Madrid.

It’s been almost the opposite for Schalke 04 head coach Jens Keller who has seen his side take only one point from their opening three games in the Bundesliga. That solitary point did come at home to Bayern Munich but they have slumped to 2-1 and 4-1 defeats at Hannover 96 and Borussia Mönchengladbach respectively.

With Chelsea travelling to Manchester City on Tuesday and with a favourable group in the Champions League we’re expecting Mourinho to rest a number of first team players for this match. The West London club have a lot of depth going forward and even in goal for the Portuguese manager to be able to name a weakened side still capable of picking up three points.

Didier Drogba is a doubt and is the only injury concern for the home side. 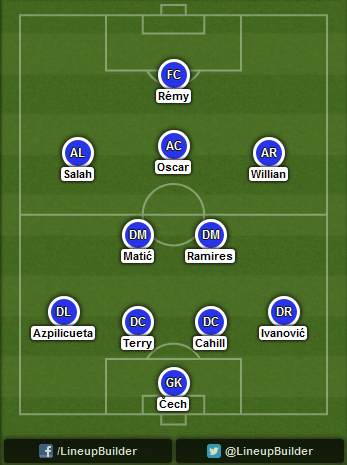 With Sunday in mind and an opportunity for squad rotation we are expecting Petr Čech to play between the posts on Wednesday. Diego Costa reportedly had a hamstring issue during the international break – a chance to rest the Spaniard and give Loïc Rémy his first start after coming off the bench to score at the weekend. We’re giving a recall to Willian on the right wing with André Schürrle having started three Premier League games and for the Brazilian to be partnered up with Oscar once again in midfield. 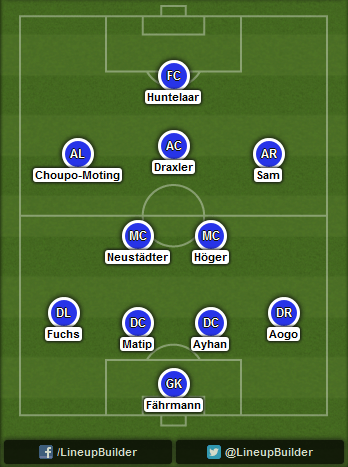 Schalke 04 are limited with their options in defence. Winger Christian Clemens played there unsuccessfully on Sunday. We’re putting Dennis Aogo on the right and Christian Fuchs on the left of a shaky defence. The attacking midfield options are good for the German side – we have left Max Meyer and Kevin-Prince Boateng out but they are options for head coach Keller.

Chelsea striker vs Schalke defence
Whether Diego Costa or Loïc Rémy start for Chelsea both should see plenty of opportunities in front of goal. Schalke have conceded seven goals in their opening three domestic games, have a number of injuries and have had 24 hours less rest. Chelsea are averaging nearly four goals a game in the Premier League too.

Chelsea left forward vs Schalke right-back
Eden Hazard would be the obvious choice but Mohamed Salah hasn’t had too many starts since joining in January and Mourinho will have his eyes on Sunday’s game at Manchester City. Whomever starts in this position is going to be against an inexperience right-back as Schalke do not have one healthy.

Julian Draxler vs Nemanja Matić
One of Schalke’s biggest threats going forward is World Cup winner Julian Draxler. Can play on either the left or the middle – is a good runner, great passer and isn’t bad with his long-range shooting either. The Royal Blues have a few good attacking players supporting him, and up front they have goalscorer Klaas-Jan Huntelaar so Nemanja Matić and the Chelsea defence shouldn’t have it easy.

Prediction: Chelsea 3-1 Schalke 04
Chelsea has made a blistering start to the season whilst Schalke have made the opposite. The Premier League side are more than capable of getting off to a winning start in this fixture even if they rest a few players. We’ve been generous is saying the visitors will score a goal as Chelsea have conceded in three of their four games so far. Don’t be surprise if this is a greater margin or victory though.