Once again it’s that time of year when we like to kick-back and ask “where did that one go?”, break out the Christmas spirit, and reflect on the football year that was. What were our highs and lows? Who stole the headlines and, more importantly, who won the prizes and is most deserving of our applause, however begrudging an exercise that may prove to be at times.

But credit where credit is due! After all, doesn’t each of us like to see praise heaped upon our own team(s) when they do the business, and as the season of ‘goodwill to all men’ approaches (yes that even applies to scousers!), it is high time we handed out the plaudits.

So I’ve come-up with my Top 11 winners for 2009 and some honourable mentions. Why 11? Well why not? If you’ve got a better number then let’s have it, but Giggs wears number 11 and that’s a good enough reason for me!

The starting place is obvious this year but maybe there are one or two surprises and no doubt you’ll highlight my oversights…..which is 49% the point of the exercise anyway (I like to keep a controlling interest in these things!) 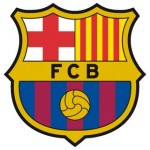 Yes, the Catalans were irresistible this year! It used to be a case of ‘the peasants were revolting’ down in Catalonia….now they’ve become European royalty! The first time the ‘Treble’ was achieved by a Spanish team; Barca swept all before them, scored goals for fun, and in Xavi, Iniesta, Messi, Henry and Eto’o presented one of the most formidable attacking units ever to grace a football pitch.

Add to that the 6-2 ‘tonking’ they gave to bitter rivals Real Madrid in ‘El Clásico’, the ease with which they won the CL Final (ouch! that hurt!), and the fact that seven of their starting eleven in that game came through their academy…… and it doesn’t really get much better than that!

So it’s hats off to ‘L’equip blaugrana’ on an outstanding year! 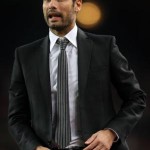 Now there’s a man with pep in his step (a comment as irresistible as his team)! Has any young manager ever had such a meteoric start to his career? Pep guided his team past all obstacles (Didier Drogba included) and carved himself a place in Spanish footballing history, regardless of what happens from here on in.

Add to that his charismatic media persona…..magnanimous, modest and congenial in equal measure, and here is a man born to the job. Could this be the start of an iconic career in football management? If ever there was a contrast to Mourinho, Sir Alex or Benitez then Pep is it. 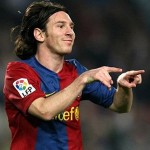 Need I say more? Pure class and luckily we’ll also see him on the World stage next year….despite the best efforts of Diego! 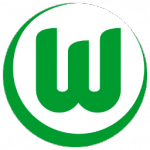 The German ‘Wolves’ sprang from nowhere to upset the elite of the Bundesliga and claim a first ever title. Lead by former German international Felix Magath, Wolfsburg infiltrated the top table of German football with some style.

Along the way they equaled the longest winning streak in a Bundesliga season with 10 successive victories. They also became the only team in the Bundesliga to have had two strikers score more than 20 goals in one season with Brazilian Grafite and Bosnian Edin Džeko achieving this feat, scoring 28 and 26 goals respectively. As a result of their title win Wolfsburg qualified for the CL for the first time in their history.

Unfortunately, they went out at the group stages when a win in their final game would have ensured qualification as group winners. But a magnificent achievement all the same! 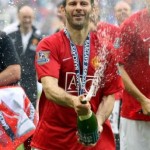 Like a fine wine Giggsy seems to get better with age! An eleventh Premier League title (see there’s that number 11 again), a third League Cup winners medal, a 1st PFA Player of the Year award and the BBC Sports Personality of the Year award (modestly accepted….as always.)

Giggsy also beat Bobby Charlton’s long standing record for most games played by a United player (in the CL Final of all places!…. it’s now at 821 and counting), and became the first United player to score 100 Premier League goals. Add to that the fact that he has never been sent-off playing for United, is the consummate professional and the ultimate role model, and you could say Giggsy has it all.

A truly outstanding year for Ryan! 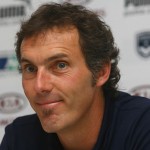 He has since guided Bordeaux to top their Champions League group with an impressive total of 16 points from a possible 18, leaving both Bayern Munich and Juventus trailing in their wake.

How far can they go? Who knows, but with Blanc at the helm they look like a well organised and talented outfit. 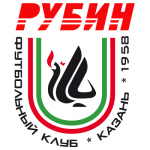 Rubin who? we all asked when these Russian ‘minnows’ first appeared on our radar. In 2008 they became only the 3rd team outside of Moscow to win the Russian League and followed that up by winning it again in 2009.

Delivered into the ‘Group of Death’ in the Champions League when matched with Barcelona, Inter Milan and Dynamo Kiev, these plucky Russians had the audacity to take four points off Barca, including a memorable win at the Camp Nou, and while they ultimately came-up short, they made it more than interesting (anyone who makes Mourinho sweat scores points with me!)

Rubin, geographically the most eastern team in Europe, were a breath of fresh air in 2009! 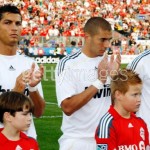 Well OK, they didn’t actually win anything and they were humiliated by Barca so why are they on the list? Well all of the above was the catalyst for the return of Florentino Perez (their 3rd President in 2009 by the way) and the promise of a new ‘Galacticos’.

And he duly delivered: Ronaldo…Kaka…Benzema…Alonso…………all for obscene money!

Perez may be about as cultured as a junk yard dog but he delivers what the Real fans want, regardless of the cost. Will it get Real back to the top in Spain and Europe? Maybe, but I hope not! 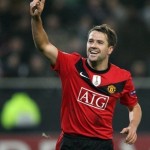 Who would have thought? Certainly few Man Utd fans that’s for sure. Even fewer Liverpool fans! Owen’s career had been careering out of control ever since he picked-up that injury at the 2006 World Cup. Newcastle relegated…where was he to go? Hull? Stoke?….indeed was anyone prepared to take the risk?

Enter Sir Alex Ferguson and Michael must have thought, in the words of Bette Davis “I’ve been lucky….. I’ve been lucky again!” In the prelude to a World Cup year Owen surely can’t resist dreaming a little these days. Seven goals from a handful of starts and a number of substitute appearances and his star is slowly rising. If he stays fit he may just get 15 to 20 goals for the season….and would/could Capello ignore that?

Then again, it may all go pear shaped but Owen couldn’t have dreamt of a bigger opportunity than this, and that qualifies him as one of this year’s winners! 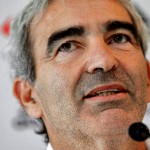 Following France’s recent world dominance, 17 wins in 33 games just doesn’t cut it for a French manager, given the talent available….but that’s been Domenech’s record to date.

After failing to top Group 7 in the qualifiers (Serbia took the honours) one of the most reviled managers in recent French history found himself in the play-offs. ‘No problem’ was probably his sentiment when he saw his team paired with the Republic of Ireland….and no problem it certainly was after they won 1-0 in Dublin.

But after Robbie Keane scored in Paris it took ‘the hand of Thierry’ and a couple of optically challenged officials to save Domenech from the dreaded guillotine. He might be like a cat with nine lives but considering his balls have been dangling before the butcher’s knife all year you have to reward him with a place on the winners’ rostrum….…non? 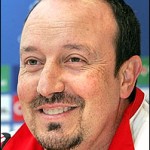 Before you choke on your porridge…read on! Rafa is a man who knows how to play the game….if not on the pitch, then certainly off it.

As Liverpool’s best ever challenge for the PL title started to wilt in the first months of the year, Rafa was making moves with the dexterity of a pole dancer down to her g-string.

He’s clearly been there (watching I mean….as the alternative interpretation is just too….!) You tweak it here and tweak it there, but when the ultimate moment comes make sure all of your best assets are showing. And so Rafa publicly ‘tweaked’ the nuances of his new contract to get his loyal fans salivating, waited for the ‘purple patch’ to be revealed to a frenzied audience and was off to the boardroom like someone had shoved an onion up his ass, to sign a new five year deal.

A £20m pound insurance policy you might call it….and based on what has gone down since at Anfield who could deny that it was the shrewdest move of the year?

Stand tall on the podium Rafa! A win is a win in any man’s language…and that’s a fact!

Nobody’s tip to take the MLS title this year, it was a backs to the wall exercise for this young club.

The ‘big city’ glamour boys may not have taken them too seriously but they came-up trumps, digging out results and beating the ‘pretty boys’ of LA Galaxy in a penalty shoot-out to win the final.

You’ve got to love the underdog…and they certainly were that!

For those who missed the Copa Sudamericana final, it was a thrilling affair with Liga winning the 1st leg 5-1 before falling 3-0 down (to Fluminense of Brazil) in the 2nd leg and finding themselves with only 9 men. But they held out and continue to strike a blow for the ‘little guy’ as representatives of one of South Amreica’s smaller nations.

As a now resident of the southern hemisphere how could I not acknowledge the qualification of both Australia and New Zealand for South Africa 2010? The first time both have qualified together; thanks to the Aussies decision to go via the Asian qualifiers.

Both have tough groups but if the ultimate were to happen….a meeting of these great rivals on football’s biggest stage….. then the ‘All Whites’ and the ‘Socceroos’ will both have to make the semi-finals.

And with that (and considering that!) the only thing left to say is…..Goodnight Irene!